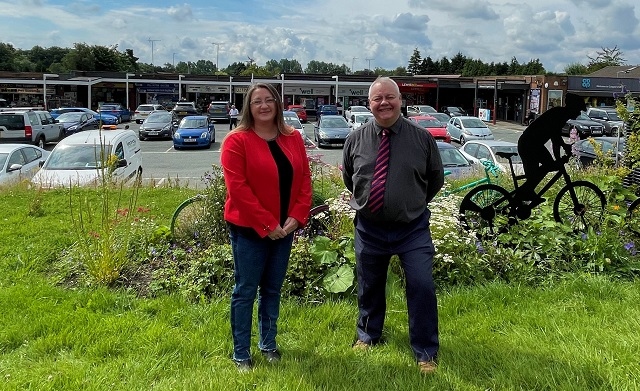 The council will continue to maintain the parking spaces, which are well used by shoppers and people attending nearby community facilities (pictured: Councillors Rachel Massey and Neil Emmott)

Councillors have voted to retain control of a shopping precinct car park – ensuring it can continue to be well used by local people for free.

At a meeting of the council’s cabinet on 31 August, members rejected surrendering control of the car park at Cutgate shopping precinct off Edenfield Road in Rochdale.

The council - which does not own the land - had previously considered washing its hands of the car park, which has cost the authority over £20,000 in repairs over the last six years, according to the Local Democracy Reporting Service.

The long term cost of running the car park was earlier this year estimated at nearly £240,000 - and any future costs would need to come from the Rochdale Township budget. The £240,000 figure was disputed by members and officers were asked to revisit the costings. It was agreed on 31 August that the council would devote £4,000 per annum for the next five years.

The council will continue to maintain the parking spaces, which are well used by shoppers and people attending nearby community facilities like Cutgate Baptist church and Passmonds bowling green.

A section of the car park was dedicated to the council in 1976 as an off-street car park to be maintained for public use at public expense.

In March, over 1,000 people signed a petition, calling for the car park to be kept under Rochdale Council’s control, rather than surrendering it back to the landlords of the shops.

The petition warned that costs of maintaining the car park would fall to “users of the car park, i.e. customers and shop owners.”

Councillor Rachel Massey, portfolio holder for children’s services and education and a councillor for Spotland and Falinge, said: “The potential introduction of charges or time limits would have had too much impact, and was not a risk we were willing to take. The car park is used by residents visiting the shops, the doctor's surgery, the church, and for much more, it’s a vital resource for our community.

“Edenfield Road is a critical route and anything which limits parking on Cutgate shopping precinct could lead to dangerous parking on Edenfield Rd which would have a knock-on effect on traffic. We received over 1,200 signatures from residents and the businesses who were against us surrendering the deed back to the land owners.

“We have listened to their concerns, recognising that the car park is a very important community resource. We continue our commitment as a council, to providing the first class public services that our residents expect.”

Councillor Neil Emmott, leader of the council, said: “As we come out of Covid-19 restrictions, the difficulties faced by the retail and business sectors over the last 18 months are something that I’m very aware of.

“It’s important that as a council that we try to give as much support to them as possible. Supporting free parking at a very well used shopping precinct will help the small businesses and that’s something we’re very much behind.”