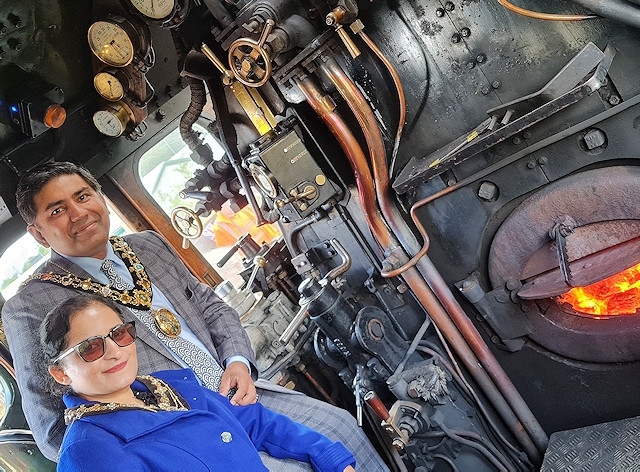 This weekly column is about the places he has been and the people he has met from Monday 16 August to Sunday 5 September.

A double book launch addressing dementia for BAME communities (Black, Asian, Minority Ethnic) was hosted at Number One Riverside on Wednesday 18 August. Shahid Mohammed has written two books entitled 'A Fragmented Pathway, Experiences of the South Asian Community and the Dementia Care Pathway’ and ‘We Are Together’ - a bilingual collection of dementia family carers’ reflections, experiences and poetry during the Covid-19 pandemic and lockdowns.

I pledged my support and agreed to hold further conversations to ensure health and social services meet the needs of Rochdale’s diverse communities, from raising awareness of dementia, appropriate pre- and post-diagnosis support, through to end of life care.

Congratulations to Shahid for this huge accomplishment.

This year’s summer playscheme at Deeplish Community Centre entertained over 150 children, and I attended the centre on Thursday 19 August to present certificates to all those involved.

Across five weeks of the summer holidays, children were provided with a programme of activities including indoors sports and games, outdoor challenges, visits to places like Hollingworth Lake, Heaton Park and Tandle Hill, and even enjoyed circus skills and arts and crafts workshops. The programme this year has proven to be a huge success and I hope even more will get involved and benefit from the local playscheme next year.

Later on Thursday afternoon was the Friends of Queen's Park annual general meeting (AGM) at Queen's Park, Heywood. I will continue to represent and promote Queen's Park in all its glory as an entertainment space with a bowling green and play area for both adults and children included, as well as access to tennis courts, ‘multiple use games area’, the lake and woodland walks. Thank you to the Friends group for having me in such beautiful settings.

Rochdale Fusiliers hosted a meal at The Flying Horse on Friday 20 August for the 262nd anniversary of the Battle of Minden. The Mayoress and I both attended to enjoy dinner and commemorate the battle, which happened on 1 August 1759.

Thank you to the local branch of Fusiliers for inviting us.

The next week, on Friday 27 August, I attended a ‘Dholki Night’ at Rochdale Ukrainian Club, off Tweedale Street. The night focused on Awakening Minds – a local non-profit organisation founded in 2016 that provides Punjabi mental health services.

The organisation supports women with mental health and any other problems they may face, to educate individuals and families with tools to recognise and deal with ‘the underlying issues associated with ill mental health in a culturally appropriate manner’.

This was an entertaining night with a DJ and dancing, where all had fun. I went at the start of the event to open the evening, and provided a welcome speech before enjoying some delicious food.

The East Lancashire Railway welcomed the Flying Scotsman back to Heywood on 31 August. The celebrated locomotive, which is owned by the National Railway Museum, stopped at Heywood railway station and the mayoress and I hopped on board.

Locomotive No. 60103, Flying Scotsman was built in 1923 by the LNER to haul express passenger services between London and Edinburgh and it quickly became a favourite with the travelling public and famously became the first locomotive to officially travel at 100 miles per hour.

In 2004, the locomotive was bought by the National Railway Museum and after a long restoration in the workshop of Riley & Son (E) Ltd in Heywood, was returned to the tracks in 2016. It now hauls passenger services across the country, and we were lucky enough to see it in person.

The Asian Restaurant Awards cover a range of Asian and Oriental cuisines, ranging from Bangladeshi, Chinese, Filipino, Indian, Japanese, Korean, Middle Eastern, Thai, Turkish and Vietnamese, and I was grateful to be invited to enjoy a nice meal and witness the awards.

I attended the weekly Veteran’s Breakfast on Thursday 2 September which is now held in their new venue – Touchstones Rochdale. The weekly gathering is usually held at Rochdale Town Hall’s Clock Tower Dining Room, however due to the town hall’s restoration closure the veterans have found a new location.

It was lovely speaking to all the veterans, hearing their life stories is always fascinating. The breakfast club really is a good initiative in Rochdale, allowing the armed forces community to come together every week to catch up and enjoy one another’s company.

Merchant Navy Day was made an official day of remembrance on 3 September 2000 and falls on the 3rd of September every year to honour the men and women who fought in the World Wars to commemorate and to raise awareness of the British Merchant Navy by acknowledging the contribution made by Britain's merchant fleet to both World Wars.

With the slogan ‘Fly the Red Ensign for Merchant Navy Day’, I raised the Red Ensign outside Number One Riverside to honour the brave men and women who kept the UK afloat during both World Wars and celebrated our dependence on modern day merchant seafarers who are responsible for more than 90% of the UK’s imports.

We lost up to 30,000 seamen during WW2; they should never be forgotten.

The largest rowing regatta in the North – the North of England Sprint Rowing Championships - took place at Hollingworth Lake Rowing Club on Saturday 4 September, with hundreds of competitors descending to the local reservoir.

More than 900 competitors from over 30 clubs took part in 215 three-lane races. Most categories were raced from junior 12 2x, through many senior and masters’ events in all boat classes.

The Mayoress and I visited the regatta with Sir Tony Lloyd, MP for Rochdale, and were impressed with what we saw at the first regatta since the pandemic hit.

After the rowing, Aspire 2 Inspire celebrated the opening of its new premises on Regent Street with an awards ceremony. I presented children with certificates who had taken part in the Aspire 2 Inspire summer playscheme.

All the guests enjoyed refreshments and finished off the afternoon with the chance to look around the newly decorated building and hear the group’s plans.

Thank you to the non-profit group for their hard work throughout the summer keeping children entertained; it was very delightful to see the children so happy, big well done to the organisers.

Heywood Charities Fete returned to Queen's Park on Sunday 5 September with a daylong event for families in beautiful weather.

The Fete is an annual event which has taken place in Heywood since at least the 1930s. It usually involves a parade through Heywood, followed by a Fete at Queen's Park with stalls, activities, and entertainment, however this year there was no parade. Profits from the event are given each year in grants to local community organisations.

The gates opened at 10.30am for the Fete to begin in Queens Park, however I arrived at 1pm to officially open the event. I was accompanied by the Lee Rigby motorbike riders and members of the armed forces who formed a cavalcade; it was an experience to remember as we paraded to the recently refurbished bandstand.

I presented prizes throughout the day at the dog show and to adult and children’s teams as the bowling club ran a knockout event – congratulations to the winners. There were also fairground stalls, entertainment on the bandstand, a petting zoo, bouncy castle, food, charity, craft, business stalls and much more on offer at the annual event.

It was the last home game of the season for the first team at Middleton Cricket Club on Sunday 5 September, who went head-to-head against Colne Cricket Club. Colne bowled Middleton out for 140. In response, Colne scored 143-4 with 14 overs left and won by 6 wickets, unfortunately for Middleton.

I encourage all people in the borough, both young and old, to get involved and support their local sports teams. Not only can joining a team improve your mental health but can prevent you from suffering with physical health issues like diabetes, strokes, and heart problems. Everyone in the Rochdale community should take good care of themselves with a good diet and regular exercise to keep fit and healthy.