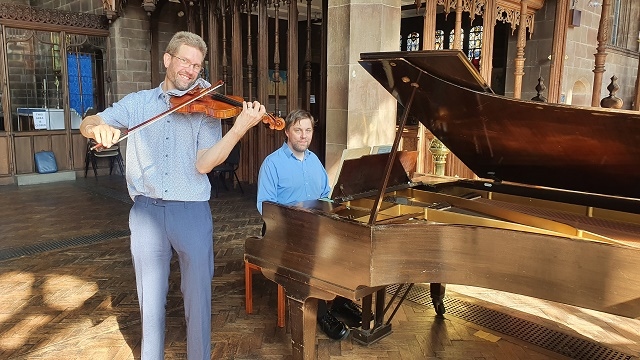 This dynamic duo revitalised the concert platform. They demonstrated why the Toad Lane Concerts need to exist. Superb musicianship burst forth to delight and satisfy an audience’s hunger for live music during their performance on Wednesday 8 September.

Duncan Reid, originally from Bristol, is a graduate of the joint course of the Royal Northern College of Music and Manchester University, where he studied the violin with Yossi Zivoni.

Since leaving the RNCM in 2001, he has worked with various orchestras and chamber ensembles, both in the local region and around the rest of the UK and is a well-regarded music teacher in schools. He also conducts the Xaverian College Chamber Orchestra. Duncan plays on a fine example of a Joseph Hel violin made in Paris during the 1890's.

His concert partner Jonathan Ellis plays alongside him in the Ryebank Trio and also studied on the prestigious joint music course where he was to win many prizes as an accompanist, in chamber music with his trio, and as a solo pianist.

He currently performs regularly as a soloist, a chamber musician, as vocal and instrumental accompanist, choral/operatic repetiteur or musical director, and with musical charities “Music in Hospitals” and “Live Music Now”.

They clearly have an extraordinary rapport and operate at the highest level of musical interpretation. This perfect instrumental pairing breathed life into Beethoven’s Violin Sonata Op. 30/3 in G major; the power of Jonathan’s piano support matched by the sinewy lines and mellow tone of Duncan’s solo work.

Similarly, with Dvorak’s delightful Sonatina op. 100, a tuneful and nostalgic work full of rhythmic vigour, these great players brought out the hiddens depths of this deceptively simple ‘little sonata’.

Rochdale’s weekly midday music – the Toad Lane Concerts happen every Wednesday at 12.30pm. No refreshments are available at the moment but the events are Covid secure.