You are Here: Home » News » News Headlines » Suicide Intervention Tutor shares her story of hope to help shine a light on suicide 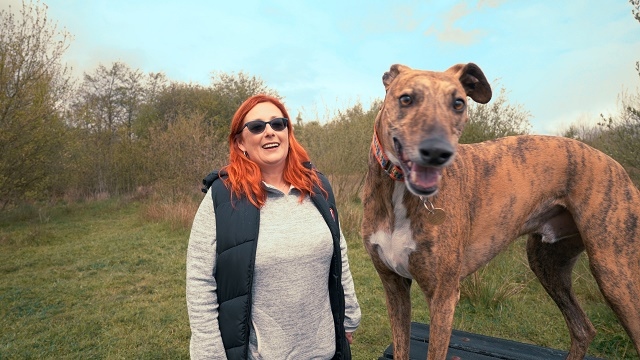 This World Suicide Prevention Day, Andrea Newton is sharing her story of hope as part of Greater Manchester’s Shining a Light on Suicide campaign to give hope to those struggling with suicidal thoughts.

With bright orange hair, an outgoing manner and her lively seven-year-old lurcher Asbo a constant companion, Andrea Newton feels that people might get the wrong impression of her.

“When people meet me for the first time, they tend to think that I’m very confident, extrovert and outgoing. There have been occasions where I’ve been described as a gobby northern bird!”

But not far below the surface of that outward persona is a thoughtful and quiet Andrea. A person who has used her own experience of being on the brink of suicide to help other people talk about the issue, giving them the skills to intervene if they think someone might be struggling.

Andrea, a proud mother of one grown-up son, was in a long and unhappy abusive marriage. She was using all her energy to keep up a façade that everything was okay.

Eventually, Andrea reached a point where she couldn’t keep pretending her situation was fine. She finally admitted it was over and that the marriage was finished. Andrea had to seek refuge through the courts. Following the very difficult divorce she was left with no money and ended up homeless for three months.

She was at rock bottom and intended to end her life to end the pain she was in: “I couldn’t see a way out of the hell that I was living in. I was completely overwhelmed. It felt like climbing up a slag heap wearing flip-flops.”

Worrying about what might happen to Asbo if she took her life prompted her to seek help and she called Samaritans, and a kind voice at the end of the phone gave her the chance to speak about how she was really feeling for the first time.

Andrea explains: “That conversation was the start of the climb back up. I made a promise to the universe that if I made it through that living hell, I would use what I had learned to help other people. I would use my past to make other people’s futures more positive.”

Andrea, who worked as a leadership trainer, then qualified as a suicide intervention tutor. She is now working with workplaces to help people have more confident conversations and talk more openly about mental health and suicidal feelings.

“I try to encourage organisations to create climates where people can have honest conversations. I want people to be able to confidently say ‘I am struggling’.”

World Suicide Prevention Day also marks the start of the Greater Manchester Month of Hope which runs from the 10 September until World Mental Health Day on 10 October.

Judd Skelton, Chair of Greater Manchester Suicide Prevention Programme Board said: “The Month of Hope is about spreading hope across our city-region. Last year, more than 200 people took their lives in Greater Manchester and that’s why this month and the Shining a Light on Suicide Campaign are so important.

“You don’t have to be a healthcare professional to help someone who is feeling suicidal – you just need to ask and listen. I would encourage everyone to take part in the Learn to Save a Life training. It only takes 20 minutes and it will help you feel more confident to ask someone if they are struggling with suicidal thoughts.”

This year, residents are being encouraged to help spread hope across the city-region by sharing what gives them hope, with friends, family, colleagues and on social media using the hashtag #MonthofHope

Suicide affects us all. Encourage someone to talk before suicide seems their only option. Together we can help prevent suicide. Find out how at www.shiningalightonsuicide.org.uk

If you’re bereaved by suicide, you do not need to deal with your grief alone. Greater Manchester Bereavement Service can find the right support for you. Visit: www.greater-manchester-bereavement-service.org.uk

Take the free 20 minute training to learn how to save a life: www.bit.ly/savealife20