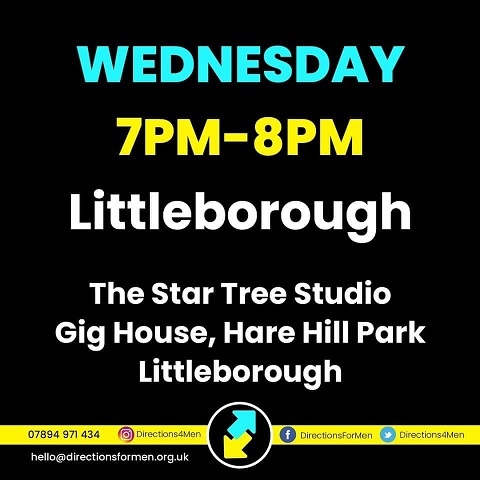 A new support group for men struggling with their mental health has been set up in Littleborough.

Directions for Men, which runs peer support groups across England, has launched its latest group at the Star Tree Studio at Gig House in Hare Hill Park.

The group runs each Wednesday from 7pm to 8pm and is co-ordinated by Wesley Claridge, who moved to Littleborough from Northampton in May 2017.

He said: “That move took us away from almost everyone we knew, so my wife and I used social media to find local groups to meet new people. She found loads and I only found a Lancashire ‘dads’ group mostly situated around Preston, Blackpool and Lancaster.”

After Covid hit and brought everything to a standstill, they began Zoom dad groups, where they would chat about their worries and struggles or just general conversations about football and other hobbies.

Towards the end of 2020, Wesley’s mental heath had deteriorated after 'a series of extremely long-term negative events came to a head' and he suffered a series of minor breakdowns before seeking therapy.

He added: “Lots of stuff I had not considered came to the surface and I started learning how to deal with things a lot better.”

It was then that Wesley contacted his Dad Matters leader, Kieran Anders, explaining he wanted to become more involved and help other men who are experiencing similar mental health problems.

Statistics show as many as one in four adults and one in eight young people will experience a mental health problem – but men are less likely than women to talk about their problems. Suicide is the biggest killer of men under 49 and women aged 20 to 34. Every year more than 200 people in Greater Manchester die by suicide, and each death can affect up to 135 people.

Not only are men far less likely than women to seek professional support, they are also less likely to disclose a mental health problem to friends and family, which is where groups like Directions for Men can help.

Dad Matters started local ‘walk and talk’ groups for fathers, and Kieran also put Wesley in contact with Chris Judge, who founded Directions for Men in 2019 after a close relative took his own life, wanting to help and support other men before reaching that stage.

Wesley, who was given facilitator training to help other men, added: “We find that if you talk to people about the simplest of things and help them build trust in a safe environment, they will open up in their own time and eventually find out for themselves what the root problem is.

“Once that is discovered, we offer support and signposting to relevant services or if it is simply a weekly meet up away from the stresses of general life, in a moment that they can feel safe and free to talk about what they then we have done our job.

“I still struggle with demons that started years ago, but through becoming aware of my feelings and emotions, I am learning to be a better version of myself, the kind of person I always wanted to be without the negative attitude I was taught growing up.

“In helping others find that in themselves, hopefully over time we can become a happier, calmer and more friendly society.”

Directions For Men is a community group offering a safe, confidential, non-judgemental space for men aged 16 - 100 to open up as much – or as little – as they want to. There are currently nearly twenty sessions across Manchester, walking football, Zoom chats, group meetings such as the one in Littleborough, and other weekly events.

The Littleborough group session is every Wednesday 7-8pm at the new Star Tree Studio in Hare Hill Park. More information can be found on the Directions for Men website.