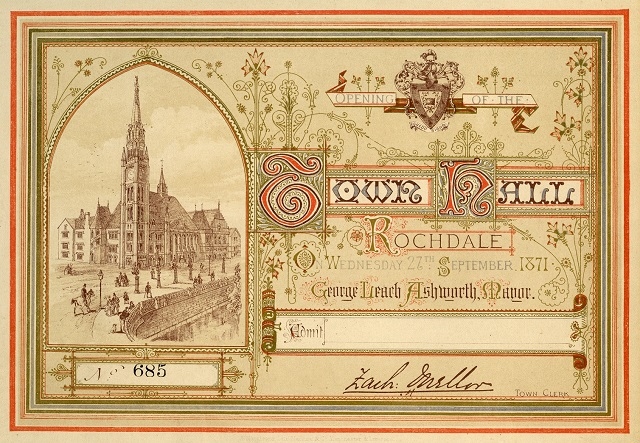 Rochdale’s stunning town hall, widely considered to be one of the finest municipal buildings in the country, is turning 150 years old and residents are invited to get involved in a celebration.

The gothic masterpiece first opened to the public on 27 September 1871 after architect William Crossland won a competition to design the building.

Rochdale was formed as a new borough in 1856 and the corporation wanted a fitting new civic building to mark this new status.

Later used as a magistrates' court complete with police cells in the basement, and for many years as a backdrop for major events and celebrations, as well as a base for council staff and even doubling as a film and television set, the Grade-I listed structure has been part of the fabric of Rochdale borough since its inception.

With the town hall now temporarily closed to facilitate a multi-million redevelopment, supported by the National Lottery Heritage Fund, the 150th celebrations will be a relaxed, informal affair.

They will take place on Saturday 25 September in the brand new Crossland Community Cabin, a specially crafted drop-in area in front of the town hall, which is packed full of information about the restoration and what’s happening.

Residents are invited to pop into the cabin for tea and coffee to mark the occasion. As well as taking a look at the displays and chatting to the project team about the redevelopment and opportunities to get involved, historic artefacts will be on display and visitors can win prizes in a special history competition.

Councillor Neil Emmott, leader of Rochdale Borough Council, said: “Rochdale Town Hall has stood proud for 150 years as an incredibly important part of our borough’s rich history and one of the most outstanding buildings in the north of England.

“From depictions of Oliver Cromwell to symbols of our trading partners when the industrial revolution was at its height, it tells the story of our borough’s rich history and radical political traditions, and its people. It’s wonderful to mark this important anniversary and I hope our residents will pop down on Saturday and be part of this celebration.”

Supported by the council and the National Lottery Heritage Fund, the restoration project will restore and repair many of the building’s historic features and open up long lost spaces, with brand new exhibition and event areas giving the public more access to the building than ever before. Town Hall Square will also be transformed into a brand new outdoor events space, designed by internationally renowned landscape architects, Gillespies.

Councillor John Blundell, cabinet for regeneration and communications at Rochdale Borough Council, said: “It’s particularly fitting that we’re celebrating this important milestone now, as the town hall is getting ready for the next phase of its incredible journey.

“The town hall has a wonderful history, but, with the changes we’re making right now set to open this building up to even more people and give it back to the people of Rochdale, its future will be even brighter. The best is yet to come.”

The drop in celebration event, which is open to all, will take place this Saturday (25 September) at the Crossland Community Cabin (in front of Rochdale Town Hall, opposite the Medicine Tap) from 10.30am to 2pm.