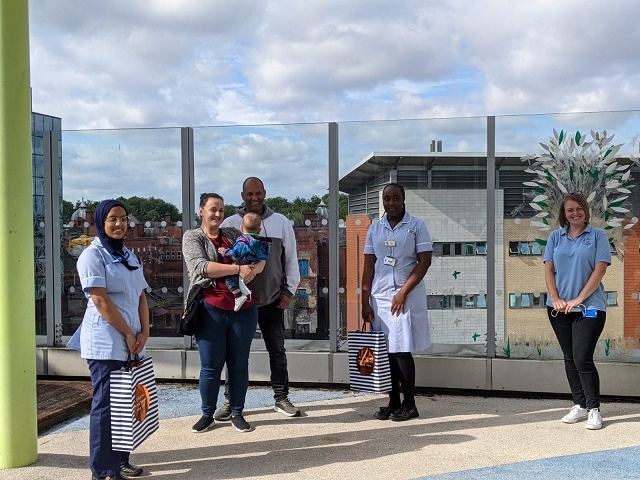 A 10-month-old baby from Heywood was reunited with his neonatal nurses from St Mary’s Managed Clinical Services for National Neonatal Nurses Week (13–19 September).

Spoons, a charity that supports families experiencing neonatal care across Greater Manchester, organised a reunion for nurses Maryam Bibi and Sonia Banda and 10-month-old Jake Robinson. Maryam and Sonia were part of a team of nurses from the Saint Mary’s MCS NICU (neonatal intensive care unit) who cared for Jake for over a month last autumn.

Prior to his birth, a scan showed that Jake had a suspected congenital diaphragmatic hernia (CDH). CDH is a hole in the diaphragm which allows the stomach and bowel to grow in the chest area, reducing the space for lung development and putting pressure on the heart.

Jake was given a 60% chance of survival. When he was born on 20 November 2020, he was ventilated and taken straight to the NICU. At just seven-days old, he underwent life-saving surgery and has thankfully thrived ever since.

Jake’s mum, Katie Ashley, commented: “It was very scary when Jake was first born. Not only were we incredibly frightened about his condition, but on top of that, there was also the threat of Covid and what that could do to him if he caught it.

“All of the doctors and nurses at Saint Mary’s Hospital were wonderful and now Jake is 10 months old and doing so well, we want to say a huge thank you to everyone involved in his care. We are so grateful.

“Sonia and Maryam really stuck out to me and my partner as being super special people. I’ll always remember Maryam taking the time to shape Jake’s wires into a heart and how she helped us learn how to tube feed him. She also helped me give him his first bath when my hands were shaking. Sonia was always so friendly and cheerful and just a great presence on the unit. It was clear she adored Jake.

“We can’t thank them both enough for everything they have done for us as a family.”

Maryam Bibi, NICU nurse at Saint Mary’s MCS, commented: “It’s been brilliant seeing Jake and his parents. I remember Katie and her partner being actively involved with us as a nursing team, ensuring that every day he was one step closer to going home. His progress post-surgery was amazing to see, and it was an honour to be part of the team providing his care.”

Kirsten Mitchell, founder of the Spoons charity, said: “When babies are on the units, the highly trained and skilled nurses form a critical part of a support system for parents; parents who are often highly stressed and anxious about their babies.

“Once a baby is discharged and able to go home, being able to properly mark that moment and thank the nurses involved in a baby’s care is an incredibly important part of a family’s journey, however, the pandemic has made that impossible. There were no hugs and celebrations for so many families and no opportunity to thank the incredible neonatal teams.”

The partnership between Saint Mary’s MCS and Spoons has been in place since last year.

Volunteers from the charity spend time on the unit to provide peer support to parents, as well as offering trauma counselling, bereavement support and community groups and play sessions.