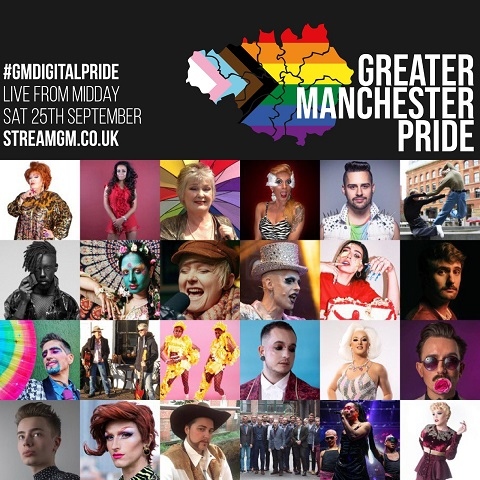 This year’s event – hosted exclusively by StreamGM – has been curated as many of the region’s Prides have been forced to cancel or significantly scale-down their events this year.

Carl Austin Behan, LGBTQ+ Advisor to The Mayor of Greater Manchester, said: “Due to the uncertainty of live events being able to take place this year the Greater Manchester Pride Network wanted to make sure that all of our LGBTQ+ community could still engage with their respected communities in a meaningful way.

“I can’t thank the Pride event organisers, across our whole city region enough for all the work they have done to help pull this together as well as all the fabulous, talented artists and people behind the scenes who have all given their time for free.

“Manchester Licenced Village Association are trying to raise £100,000 to support the George House Trust welfare fund and LGBT Foundation Free Condom & Lube Distribution service, so we are asking people to support this fundraising initiative by either the GoFundMe Page or by texting a donation.”

StreamGM co-founder Marie-Claire Daly said: “Pride events are such an important part of the cultural calendar in Greater Manchester, celebrating LGBTQ+ culture and providing time and space for us all to reflect on progresses that have been made and to work towards even greater equality, where everyone, regardless of sexual orientation, gender, background, religion or ethnicity, has the ability to thrive, free from intolerance, prejudice or hate.

“The cancellation or scaling down of Prides across GM has been a huge blow to many performers and communities from our city region so we’re delighted to be working on this event and can’t wait to watch this joyous celebration of LGBTQ+ talent.”

The Safer Sex Pack Project was set up by the LGBT Foundation in 1994 and has delivered more than 31 million safer sex packs to people in Greater Manchester in those 27 years.

The scheme was funded by Manchester Pride until July 2021 when it was “no longer in a position to continue funding it in the future” due to the impact on the pandemic.

Text donations can also be made by texting TARGET100K to 70085 to donate £5. Texts cost £5 plus one standard rate message and you’ll be opting in to hear more about George House Trust and LGBT Foundation’s work and fundraising via telephone and SMS.

If you’d like to give £5 but do not wish to receive marketing communications, text TARGET100KNOINFO to 70085.

In a joint statement, Paul Martin OBE, Chief Executive of LGBT Foundation, which delivers advice, support and information services to LGBT communities, and Darren Knight, Chief Executive of George House Trust, which offers services to people living with and affected by HIV ,said: “We are delighted to have the support of the first-ever Greater Manchester Digital Pride.

“The generosity of people in supporting the Village Licensed Business Association’s GoFundMe campaign and raising awareness of our work has been inspiring. This money underpins our life-changing work and is essential to making the world easier, safer and healthier for all LGBTQ+ people and people living with HIV in Greater Manchester.

“Whilst in-person Prides have taken place, we know not everyone can engage with their community in this way. This free online event will give LGBTQ+ people a moment to celebrate who they are and the community they belong to.

“We welcome the kindness of people watching Greater Manchester Digital Pride who want to give back to the community and help carry us towards our goal.

“A special thank you goes out to all the amazing organisations and local Prides for making Greater Manchester Digital Pride happen. Their unwavering support, passion and enthusiasm mean everything to us.”