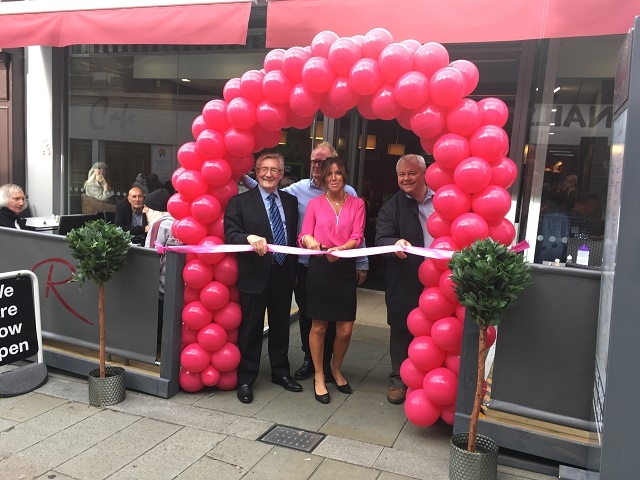 Russell’s Café, one of Rochdale’s longstanding and most popular cafés, has reopened on Yorkshire Street.

The café previously called the now-closed Wheatsheaf Shopping Centre home since 1997 but was forced to move after its closure.

The new café has both indoor and outdoor seating and now employs 19 members of staff.

Owner Jeremy Guest estimates it has cost around £75k to move premises, not including the fixtures and fittings they already owned and brought over from the Wheatsheaf.

Part of the costs were covered by a council relocation grant, plus support from the Rochdale Business Improvement District (BID).

Mr Guest said: “To move restaurant infrastructure is enormous – it’s not like moving other types of high street businesses.

“Russell’s has been in the Wheatsheaf since June 1997 and since then we’ve had multiple landlords and multiple letting agents. We had a horrendous year last year and then in mid-November the shopping centre informed us it was closing permanently.

“Keeley Milne, our general manager, has been here since day one and she is the reason we’ve been so successful.

“If I hadn’t had support from the BID and a relocation grant from the council to cover some of the costs of moving, then we couldn’t have reopened.”

“We want people to come into the town centre for leisure and to shop. Places like this café are a huge part of that.

“I’m delighted the council were able to help Russell’s reopen.”

Paul Ambrose, Rochdale BID Manager, said: “It’s great to see that such a well-loved and long-standing business has successfully relocated to a vacant unit along Yorkshire Street.

“The BID has received positive feedback from customers of Russell’s Café who have commented that the offer is better than ever and that it has been great to enjoy the recent warm weather whilst having lunch on the outdoor terrace.

“This busy café is helping to increase footfall along Yorkshire Street as well as improving the visitor experience.

“The BID wishes the Russell’s team every success in their new premises along Yorkshire Street.”

Sir Tony Lloyd added: “I’m delighted to be here today. Yorkshire Street is the beating heart of the town centre and this new setting for Russell’s is bright and modern. It looks great – and it’s packed!”