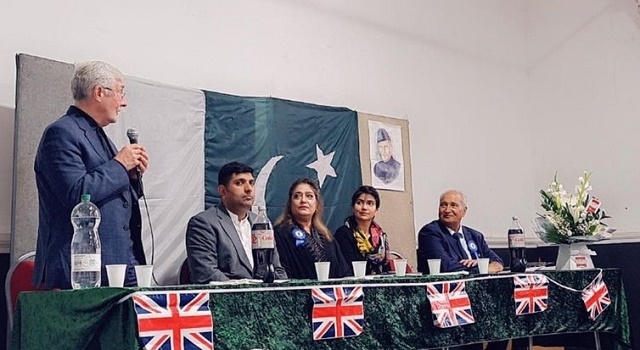 The Press Club was joined in marking the occasion by distinguished guests, including MP Sir Tony Lloyd, the Mayor of Rochdale Aasim Rashid, Lord Wajid Khan, and local councillors.

Muhammad Ali Jinnah was born on 25 December 1876 in Karachi, now in Pakistan, but then part of British-controlled India. He was a politician who successful campaigned for an independent Pakistan and became its first leader. Many Pakistanis refer to him as 'Quaid-I Azam' or 'Great Leader'.

Jinnah came to London in 1892, after studying at Bombay University. He was admitted to London’s Lincoln Inn where he became a barrister. He returned to India in 1894 where he took an interest in national politics.

He joined the Muslim League in 1913, formed a few years earlier to represent the interests of Indian Muslims in a predominantly Hindu country. By 1916, he was elected its president.

In order to solve the ongoing communal problems between Hindus and Muslims, in 1930, Dr Muhammad Iqbal – a barrister, philosopher and politician – suggested a separate homeland.

In 1940, at a Muslim League session in Lahore, the first official demand was made for the partition of India and the creation of a Muslim state of Pakistan. Jinnah had always believed that Hindu-Muslim unity was possible, but reluctantly came to the view that partition was necessary to safeguard the rights of Indian Muslims.

Jinnah led the campaign and was successful, with the partition of India and the formation of the state of Pakistan taking place on 14 August 1947.

Jinnah became the new country’s first governor general, but died of tuberculosis on 11 September 1948. He was buried in Karachi.