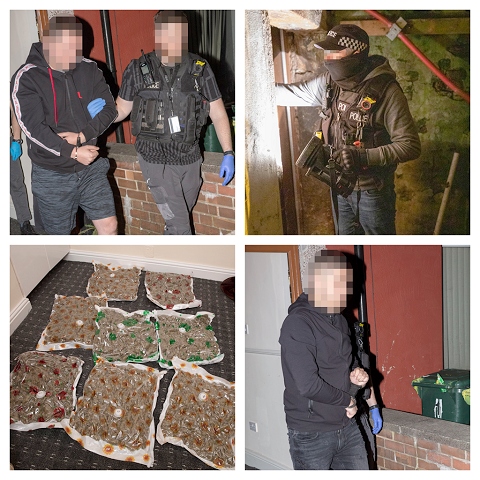 Seven men have been arrested after dawn raids in Rochdale, Heywood and Bury this morning (Tuesday 21 September).

The seven men - aged between 23 and 55 - were arrested on suspicion of conspiracy to supply class B drugs after police carried out 6am raids at nine addresses. During the warrants, officers recovered £30k cash, 18kilos of class B drugs, and weapons.

Detective Sergeant Louise Ashurst, from GMP's Serious and Organised Crime Group said: "Today's action is a result of months of proactive and investigative work which has led to drugs and the criminal proceeds of those drugs being taken off the streets of Greater Manchester.

"The arrest and seizures are testament and dedication put in by all of the officers involved who are helping to disrupt serious organised crime.

"The detrimental impact of serious organised criminal activity does not just impact those involved but can be felt across communities and GMP is committed to identifying this activity and ensuring those responsible face the appropriate justice.

"As always, we would ask that anyone with information or anyone with concerns to contact us as we work to disrupt serious crime across the region. Intelligence from members of the public continuously helps us with our on-going investigations - no matter how small the information may seem.

"Anyone with information should report it online or by using our LiveChat service at www.gmp.police.uk. Alternatively, contact Crimestoppers anonymously on 0800 555 111."