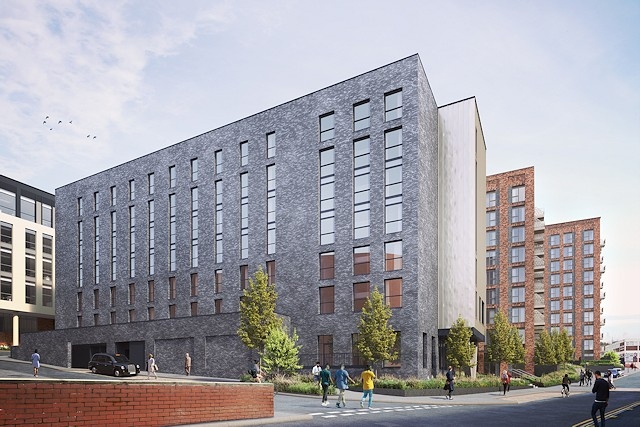 A CGI of how the Upperbanks buildings could look

The chief executive of Rochdale Borough Council has used emergency powers to tell a developer it can start buying building materials for the second phase of the town’s flagship regeneration project.

Chief executive Steve Rumbelow has issued a ‘letter of intent’ to enable the ‘preferred contractor’ for Riverside Phase Two to place orders in advance of the main contract being awarded.

The second phase of the £50m development – also known as Upperbanks – will bring 240 apartments and a seven-storey hotel to the town centre. It has already delivered a new shopping centre boasting big names such as M&S, Next and Nando's.

The move has been made to ‘ensure the risk of significant additional construction costs are mitigated’, according to council papers.

Insiders say this is due to the price of material spiralling post-Brexit, with one estimate putting this at an extra £1m per month if bosses did not move quickly.

It is understood that the successful contractor for the ‘Upperbanks’ scheme  is likely to be announced next week.

Councillor John Blundell, portfolio holder for economy, has welcomed the decision, which was taken in private by cabinet members last week.

He said: “It’s great to see this development taking another major step forward. Enabling works are already well underway on site and we look forward to sharing more updates on this scheme in the coming weeks.”

A council report says that failing to act could have put £20m of external grant funding for the project at risk - including £17.1m via from the government’s Future High Streets Fund.

It also notes the potential for up to £8.7m of enabling works and design fees to be written off should the scheme not go ahead.

Officials are also considering setting up a council-owned housing company to manage the apartments on a commercial basis.

The report adds that ‘risks to further loss of income would be significant should the Local Housing Company not be established and/or the hotel franchise agreement not be realised’.

Cabinet gave approval for the council to enter into a procurement process to appoint a management company to ensure the future operation, letting and management arrangements for the apartments are in place prior to completion of the scheme.

Leading councillors also gave the go-ahead for bosses to enter into a franchise agreement with a hotel operator and approved the spending of the £17.1m Future High Street Fund grant on the Upperbanks scheme.

A full planning application for Riverside Phase Two was submitted at the end of last year.

It includes proposals for two nine-storey apartment blocks, featuring 240 one and two-bedroom flats.

The plans also feature a seven-story hotel boasting 147-rooms, while permission for 4,000 sq m of office space would only be built out if an occupier is secured.

The costs of the construction of the apartments and hotel are to be funded from Public Works Loan Board borrowing and external grants.

The scheme is part of a joint venture between Genr8 Developments and Kajima, in collaboration with Rochdale Development Agency and Rochdale Council.