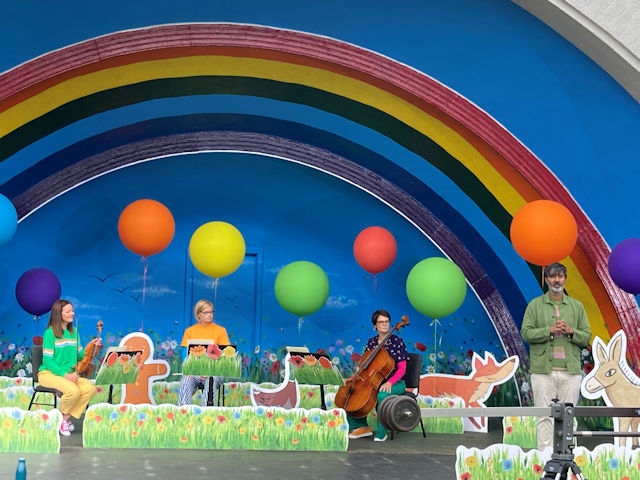 Heywood’s Queen’s Park once again attracted a small film crew as members of the BBC Philharmonic Orchestra recently descended to the bandstand to film the Gingerbread Man - a short film aimed at under sixes, featuring the Early Ears Trio, narrated by 5Live’s Nihal Arthanayake.

The trio had been touring their live music education workshops all around primary schools and nurseries across the North West but had to stop live performances during recent restrictions.

The idea to turn the Gingerbread Man performance into a film for BBC iPlayer grew from the desire to bring the joy of music to as many children as possible, despite not being able to visit schools.

Jennifer Redmond, senior project manager, digital and learning, said: “We are incredibly grateful to Rochdale Borough Council for enabling us to film at Queen’s Park.

"Once we saw the bandstand, all other locations paled into insignificance, and we knew we just had to film on the rainbow stage. It is the perfect setting to combine storytelling and music in one visual, colourful package and offered us everything we needed, including changing facilities.

“The council have been fantastic in facilitating every tiny detail to help the film look and sound fabulous.”

The 1950s Hollywood bowl theatre had been renovated in July by two community artists, Toni Lane and Victoria Ash, initiated by The Friends of Queen’s Park.

The council hopes to utilise the space for future events to showcase talents, such as the Rochdale Music Service and would welcome the BBC Philharmonic back anytime.

Councillor Liam O’Rourke, cabinet member for environment and facilities, said: "We're delighted that our award-winning parks and open spaces are being recognised as some of the best locations for film crews to utilise, showcasing what our borough can offer.

"The hard work our teams put in has not gone unnoticed. From initial contact to planning, plus the provision of on-site park rangers and dedicated grounds maintenance staff who ensure our parks look amazing, guarantees the smooth running for any production.

"We would welcome enquiries from any filmmakers looking for the perfect location and can often accommodate specific requirements."

The Sky crime drama Wolfe, (first aired on 10 September), shot scenes at the bridge on Queen’s Park Road and in the park itself. The shoot included a dramatic car crash scene, depicting a car plummeting off the bridge.

If you're looking to hold an event or require permission to film, visit rochdale.gov.uk for further information.