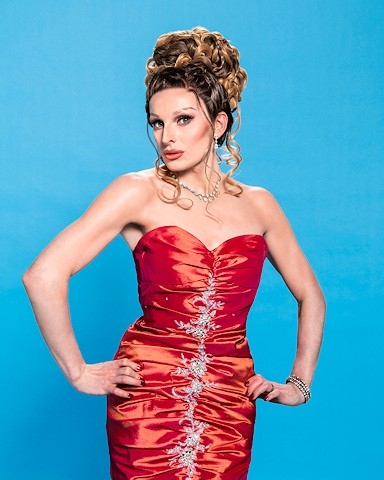 34-year-old Kevin Grogan, otherwise known as his drag alter-ego Veronica Green, is a former pupil at Springhill High School (now Kingsway Park) and was raised in Rochdale before moving to London to further his career in musical theatre.

An emotional ballad inspired by this love of musical theatre, and influenced by the 2017 film The Greatest Showman, ‘Stars’ was Miss Green's first single to be released in March 2021.

The drag queen's latest single in collaboration with Myleene Klass, ‘Nothing to Lose’, was made available to the public on 15 September, released by Intention Records.

Described by Veronica herself as an ‘epic, drama filled song’, Nothing to Lose was written by musical producer Ian Masterson and vocalist Hayley Sanderson. Ian has worked with artists such as Kylie Minogue and Girls Aloud and is the music producer of Strictly Come Dancing.

A musician since a young age with an extensive repertoire, Myleene Klass provides live instrumentation throughout the single on the harp and piano.

You can listen to Nothing to Lose on all streaming platforms here: https://slinky.to/NothingToLose

Series two of RuPaul’s Drag Race UK was shown on BBC iPlayer earlier this year and is still available to watch online, and Veronica Green proved she was definitely one to watch in the series.

In a ‘devastating’ twist of events, Green was forced to pull out of the show after testing positive for Covid-19. Fortunately, she received an open invitation from show host RuPaul himself to return for the following season.

Read more: Veronica Green is back to battle it out to become UK’s next Drag Superstar in RuPaul’s Drag RacePublished: 31 August 2021

Writing to over 5,000 followers on Facebook and 163k fans on Instagram, Veronica said: “I can’t wait to Ru-turn to the competition. I’m the first Queen to come back with a win already under my belt and if I’m not mistaken, I’m the first Drag Race queen to appear in two seasons in the same year!

“It has been a mere 35 weeks since my first ‘meet the queens’ came out and series 2 and series 3 are only eight months apart! How on earth did I manage it? You’ll just have to watch to find out.”