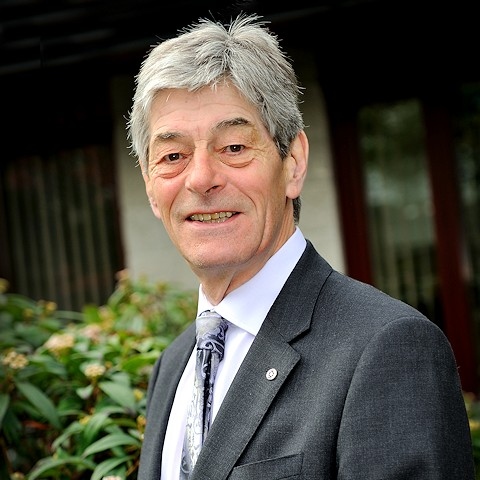 Mr Clegg received an OBE in 2015 and was made an Honorary Alderman in 2019 for his significant contribution to local charities and the education sector.

He served as a Conservative councillor for the Wardle and West Littleborough ward from 2004 until 2018, when he stepped down.

A long-time supporter of Springhill Hospice, Mr Clegg played a major role in raising the funds to have it built. He first became involved with the hospice as his role as Chief Executive of Rochdale Health NHS Trust after learning of the plans when he was hospital secretary at Birch Hill Hospital during the 1980s.

He remained actively involved with Springhill Hospice as the chairman of the board of trustees and as chairman of the Man of Rochdale committee, which raises funds for the hospice.

Mr Clegg also joined Hopwood Hall College in 2002 as its deputy chairman of corporation becoming chairman in 2007. He stepped down from this role in 2018.

During his tenure, the college was awarded a ‘Good’ rating from Ofsted in 2011 and 2017, received the same bronze TEF rating as many of Manchester’s universities and recorded one of the smallest gender pay gaps in the further education sector.

Mr Clegg had also undertaken work within the Rotary Club of Rochdale East, including the organisation of two sponsored walks around Hollingworth Lake for the Alzheimer’s Society, which raised over £14,000.

Tributes have been made to the late councillor by those who knew him well whilst the borough flag will be flown at half-mast in respect.

Councillor Ashley Dearnley, leader of the local Conservative party and ward councillor for Wardle and West Littleborough, said: "Robert was a highly respected member of council, and wonderful tributes have been paid to him from councillors of all parties and officers of the council, many lovely tributes too from so many of his constituents.

"He is remembered for his consideration always shown, his sense of humour and his determination to always do his best for our borough.

"His dedication at the college as chair of governors and chairman of Springhill Hospice for many years are wonderful achievements for which we all have benefitted.

"Robert will be sadly missed by so many people throughout the borough and beyond, but his tireless work both as a councillor, in education and in both the NHS and at Springhill Hospice will never be forgotten.

"Robert leaves a rich legacy, benefitting our borough for generations to come.

"It has been a great honour to have known, and worked with, such a wonderful man."

Councillor Neil Emmott, leader of the council, said: “I am very sad at Robert’s untimely death. He was someone I always got on well with, serving the council with great distinction over a decade, including a spell as cabinet member for finance.

“Robert was a tireless community campaigner for residents in his ward and a man of considerable charm. He also had a wonderful sense of humour and was someone who regularly made me smile and laugh with his razor sharp wit.

“I will miss Robert greatly and my thoughts are with his family and wide circle of friends at this difficult time.”

Sam Wells, Chief Executive at Springhill Hospice: "Everyone at the hospice is devastated at the loss of Robert.

"Robert was completely devoted to the hospice for over 30 years. He always made time for everyone and had a story for every occasion. He will be truly missed by trustees, staff and volunteers. His contribution cannot be underestimated and at the right time we will find a way to honour this.

"Our thoughts are with Anne and his lovely family."

Julia Heap, Principal and CEO of Hopwood Hall College said: "Robert had served as a member of the corporation for 16 years and he chaired the board from 2007 until 2018 when he retired. Robert dedicated many years of tireless service to our college as he did to the council as an elected member and Springhill Hospice as a board member and chair.

"As a member of Springhill Hospice board, I had a few telephone exchanges with him over the last couple of weeks and his wicked sense of humour, devotion to the hospice, continued interest and dedication to our college and love for his family continued to shine through all our conversations.

"Our thoughts and prayers are with his family."