You are Here: Home » News » News Headlines » Hundreds take part in the Rochdale Half Marathon, 10K and Fun Run

Hundreds take part in the Rochdale Half Marathon, 10K and Fun Run 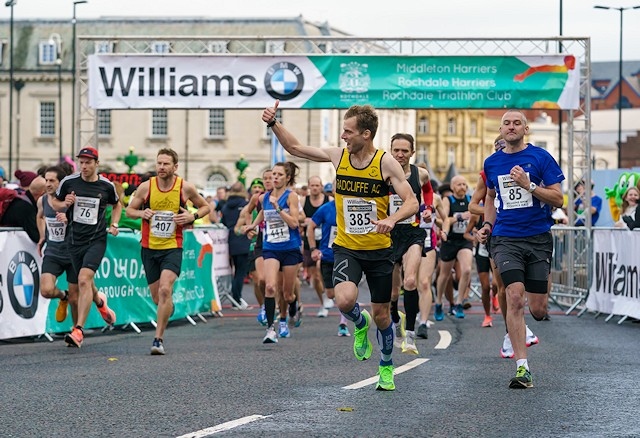 Runners descended on Rochdale this weekend for the return of Williams BMW Rochdale Half Marathon, 10K and Fun Run on Sunday, after it was cancelled last year due to the pandemic.

The event, in its sixth year, saw over 1,000 runners registered, encouraged every step of the way by spectators lining the routes covering both town and countryside.

The three races began along The Esplanade in Rochdale town centre and despite occasional light showers it was mostly dry and sunny conditions.

Each ended with a sprint back to the finish line at the town hall, where runners were met by cheering spectators and a lively atmosphere.

The half marathon was won by Neal Emmerson from Radcliffe Athletics Club for the second year in a row in a time of 01:16:10. First female was Dominque Searle from Vale Royal Athletics Club in Cheshire in 1:26:52.

The 10K was won by Martin Peck from Spenborough Athletics Club in West Yorkshire in 34:19, while the first female 10K runner was Amy Mckechnie from Queensbury Running Club, Bradford in 41:08.

Runners travelled from across the UK to take part. In addition to hundreds of residents there were entrants from Yorkshire, Cheshire, London, Leicestershire, Derbyshire, Staffordshire, Hampshire, Merseyside, Hertfordshire and Oxford.

The Esplanade was busy, with a team from Sports Physio UK providing post-race massages in return for a donation towards a new defibrillator for the area. The start and finish was hosted by race day announcer Dave Sweetmore.

Once again the section around Hollingworth Lake proved another popular spectator spot and many entrants took to social media to praise the support on the route as well as the organisation and marshalling. 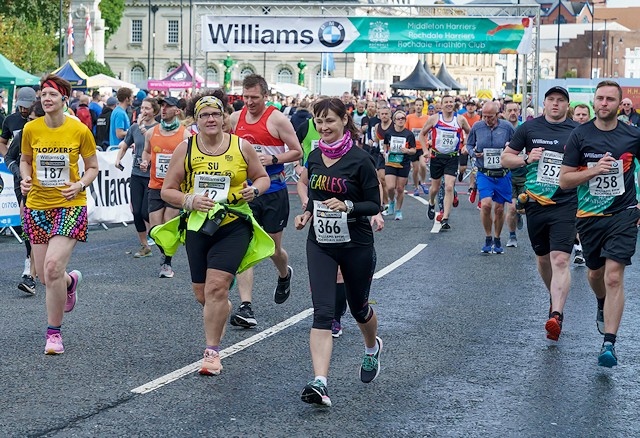 Alexandra Cook, director at sponsor Williams Group who ran the 10K along with a team of her colleagues said: “I know how important this excellent event is to Rochdale and we are very proud to be involved. Today has been a fantastic morning and it is great to be out in the fresh air, seeing so many people taking part, raising money for such good causes including our chosen charity Maggie’s. Well done to everyone.” 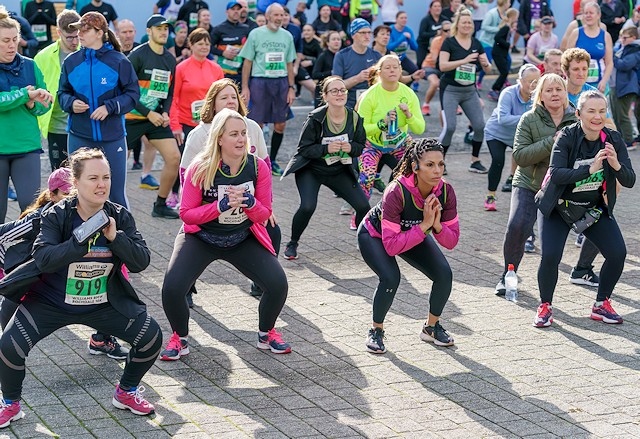 Councillor Sue Smith, cabinet member for communities and co-operation at Rochdale Borough Council added: “The weather was kind to us for most of the morning and spectators provided much needed encouragement. What a great atmosphere too. I thank the public for their co-operation during the disruption caused by the road closures. This event was made possible by the support of many local people and it was great to see it return. I also want to thank all our marshalls and the volunteers for looking after the water stations, Hopwood Hall College, SM Cash and Carry, Asda Rochdale, the samba band that played around the lake, our council staff volunteers and Rochdale Youth Service.”