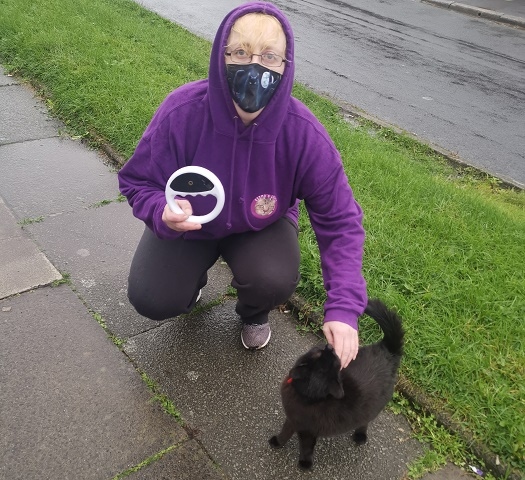 Melanie Major has joined Gizmo's Army, a network of over 1,000 volunteers across the UK who search the streets, day and night, to check dead cats for microchips before they are disposed of

A Middleton kennel assistant who has sought to reunite cats which have been killed on the road with their owners “for as long as she can remember” has joined the 1,000 strong Gizmo’s Army of volunteers in a new cross-party bid to get Gizmo’s Law passed.

The ‘Gizmo’s Legacy’ campaign calls for local authorities to check all cats killed or injured on the roads for a microchip – started after a cat, Gizmo, was hit by a car and euthanised, despite being microchipped.

As a result, she was not reunited with her distraught owner, Heléna Abrahams, of Bury, who has called for the UK government to change the law.

Melanie Major, 44, a kennel assistant by day, has reunited deceased cats with their owners for many years and now joins Gizmo’s Army, a network of over 1,000 volunteers across the UK who search the streets, day and night, to check dead cats for microchips before they are disposed of.

Melanie said: “I have always sadly collected deceased cats for as long as I can remember.

“I first heard about poor Gizmo on a Facebook page, I started talking to Heléna and I was asked to come on board with Gizmo’s Legacy, which I did straight away.”

The campaign for the new law started five years ago, with 107,000 strong petition debated in Parliament in June 2019. The petition gathered the most support of anywhere in the country in the Rochdale borough constituencies: Heywood and Middleton (634 signatures), and Rochdale (607 signatures).

Heléna said: “This law can’t come quickly enough so that our pets are shown the respect they deserve and owners are able to have closure.

“I want to give a massive thanks to our volunteers, like Melanie, who have been working tirelessly for the past five years to make sure that deceased cats are reunited with their owners.”

The campaign has cross-party support from Bury North MP James Daly and Luke Pollard, the Labour (Co-op) MP for Plymouth, Sutton and Devonport who are campaigning with Heléna and Gizmo’s Army for The Pets (Microchips) Bill – known as Gizmo’s Law – to be passed in Parliament.

The Bill has had its first reading in the House of Commons and supporters are now campaigning for the Private Members Bill to be heard in Parliament, before being passed into law.

Bury North MP, James Daly said: “Gizmo’s Legacy is an important animal welfare provision and I am grateful that I have had the opportunity to support in Parliament the many years of tireless campaigning by Heléna Abrahams, the driving force behind Gizmo’s Legacy.

“I wish to pay tribute not only to Heléna but to the whole team, like Melanie, who are dedicated to reuniting much-loved pets with their owners and I will continue to fight until Gizmo's Legacy is on the statute book.”

Melanie added: “The passing of Gizmo’s Law would mean so much to me as a person who puts cats above everything else in my life. Cat’s lives do matter. They are not an item of rubbish that goes on landfill.”

Despite being one of the UK's most popular pets, it is not required by law to report running a cat over: as cats can roam freely, the same argument which makes reporting running over a dog mandatory simply does not stand.

In the eyes of the law, accidents involving dogs are more likely to lead to damage, either to property or people, so drivers need to report the details to the police to establish liability.

Because dogs are required to wear collars and be kept on a lead on the highway, drivers need to report accidents involving dogs in case an offence has been committed by the owner.

Some councils – including Rochdale Borough Council – do scan cats for microchips to inform owners, but it is not a legal obligation. Rochdale Borough Council has previously told Rochdale Online it has a policy in place to scan deceased cats for microchips and 'makes every effort to identify pet owners'. Cats which are not chipped are stored for up to four weeks in case it fits a description from concerned owners. Unclaimed pets are incinerated after four weeks.

Pet food company Encore is also backing the campaign and has pledged to donate scanners, to scan deceased animals for microchips, to all councils.