You are Here: Home » News » News Headlines » Controversial plans to build hundreds of new houses on a greenfield site in Rochdale have been submitted by a major developer 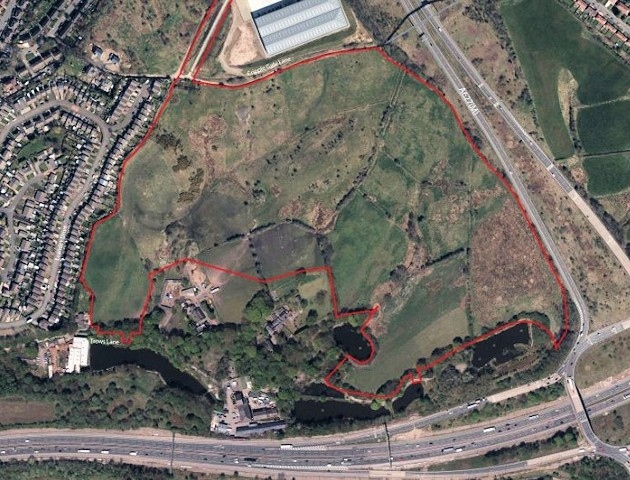 Barratt Homes has submitted plans to build 550 ‘family homes’ at Cowm Top as part of a scheme that would include a new park and improved walking and cycle routes.

The 50-acre site, in Castleton, has long formed part of a proposed Greater Manchester-wide development masterplan – now dubbed Places for Everyone (PfE).

Also known as ‘Trows Farm’, it lies to the south of Cowm Top Business Park and east of Leander Drive – close to the M62 and A627(M).

While not part of the green belt it is classed as ‘open-protected land’ and campaigners continue to object to plans to build on it and the wider PfE blueprint.

The site is highly contentious locally – and Castleton councillors Billy Sheerin and Aasim Rashid were notable Labour rebels when a majority of their colleagues voted to progress the PfE plan earlier this year.

Barratt carried out a public consultation on the scheme in August, and has now lodged an application for ‘outline’ planning permission with Rochdale Council.

If granted this would approve the scheme in principle, with more detailed information – such as house types, materials and architectural style – to be agreed later via a ‘reserved matters’ application.

Barratt Homes has submitted a lengthy design and access statement in support of the application.

This claims the site is ‘entirely suitable for residential development’ given its proximity to Castleton village, with future residents set to enjoy ‘good access to a range of services, facilities and public transport’.

It adds that the scheme ‘embodies best practice in urban design’ and would improve the edge of the village, while providing ‘ecological benefits, enhanced recreational opportunities and mitigates any potential landscape or visual effects’.

And Barratt Homes is described as being ‘committed to delivering a high-quality residential development’ that ‘respects the local character and successfully integrates existing landscape features’.

Planning documents say the development is likely to feature a mix of terraced, detached and semi-detached houses, ranging from two-bed properties to four and five-bed executive homes.

In addition to the new housing, the proposals also include ‘substantial’ on-site open space – including a ‘linear park’ – and play areas.

Cars would enter the estate via an extension to Cowm Top Lane, with Trows Lane acting as a walking and cycling link, while also providing emergency access.

Pedestrians and cyclists would be able to enter the site from any of the vehicle entrances.

Parking numbers would be provided in accordance with the council’s parking standards which sets a maximum of two car parking spaces for every house with two or more bedrooms outside the town centre.

A decision on whether to grant outline planning permission will be taken by Rochdale Council.