The High Sheriff of Greater Manchester, Diane Hawkins, visited Rooley Moor on Friday (1 October) to look at the work being done on the moorland to reduce damage caused by illegal off-road vehicles.

The adverse effect of illegal off-road vehicle on residents, the environment and upland farming has been a central theme of ward meetings for both Norden, and Spotland and Falinge over the last five years.

During that time, Greater Manchester Police and United Utilities have worked together to try and diminish such illegal activities, primarily to reduce pollutants in the water run-off going into local reservoirs, and to lessen the possibility of a major incident, should a vehicle full of fuel and oil end up in a reservoir.

In addition to damaging the natural environment – which includes protected species of ground nesting birds – illegal off-roading can also affect farmers: upland farming is suffering with livestock being stressed or killed, sheep aborting lambs and grazing being destroyed.

Rooley Moor Neighbourhood Forum Secretary Alan Rawsterne added: “Even the local windfarm on Scout Moor and the nearby Marshalls Quarry have been affected with damage to service tracks and regularly having to take action to neutralise spilled oil and petrol, removing petrol cans, broken glass and litter.

“And there’s always the risk, during those warm summer days when we like to get out into the open, of a moorland fire being started by a vehicle’s hot exhaust or a broken bottle acting like a magnifying glass – let’s not forget the recent moorland fires on Saddleworth Moor and Winter Hill.”

From this, a group of like-minded volunteers – including the Rooley Moor Neighbourhood Forum – decided to step up and work with the various organisations to try and do something positive to help, resulting in the Off-Road Mitigation Measures Project.

The first phase of the project, led by Rochdale Council’s Public Rights of Way Officer, began in April 2021, replacing 1km of damaged fencing on Edenfield Road near Owd Betts.

Since then, kissing gates, tiger traps and agricultural gates have been installed on sections of Woodhouse Lane, Knack Lane, Prickshaw Lane and on two of the Scout Moor Windfarm service tracks.

On Friday, Mrs Hawkins was able to see first-hand the collaboration between the various organisations that have pulled together to protect Rochdale’s moorland. 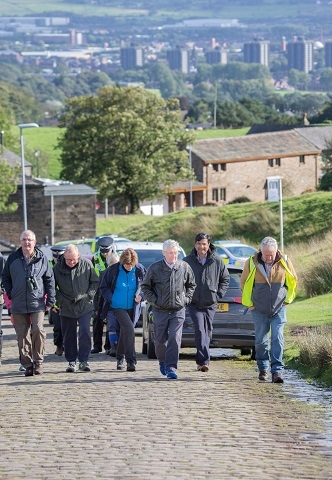 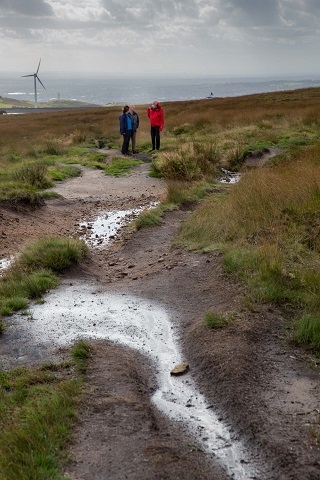 The visit took them through Catley Lane Head Conservation Area and the Cotton Famine Road, and Prickshaw and Broadley Conservation Area, with overviews of the Mary Towneley Loop, the Pennine National Trail and the Healey Dell Nature Reserve.

Mrs Hawkins said: “I was delighted to spend the afternoon with Rooley Moor Neighbourhood Forum being shown the off-road mitigation measures they have introduced. This is a brilliant approach which has the support of walkers, horse riders and those who live locally.

“Seeing the damage caused was truly appalling and it is to the credit of RMNF that they have brought together GMP, Lancashire Police and neighbourhood groups who are all working together with a common aim.”

Mr Rawsterne, secretary of the Rooley Moor Neighbourhood Forum added: “The illegal off-road issue is massive. Evidence shows that large numbers of off-road vehicles regularly travel from outside the Rochdale area, from as far away as Merseyside, Cheshire, Derbyshire and beyond, in order to illegally ride or drive on the moors.

“So far the furthest travelled and apprehended has been from Edinburgh. These off-road vehicles, particularly motorbikes, quads and 4x4s are causing significant environmental damage to the surrounding moorland peat, damaging wildlife and putting upland farming at risk.

“It’s quite staggering to see the number of organisations involved and we are grateful for the help and support from everyone.

“Our project is coming to a close, however, we are supporting similar initiatives in Whitworth and other Rochdale wards.”