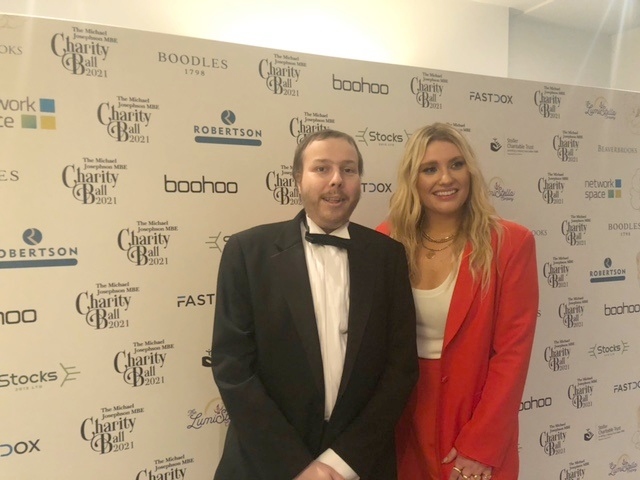 Local fundraiser Hamish Graham – who is fighting cancer for a second time – has raised over £25,000 for the Teenage Cancer Trust after completing a number of challenges and appeared on stage at the Michael Josephson MBE Charity Ball in Manchester on Saturday (9 October).

Hamish, 26, of Milnrow, was diagnosed with acute lymphoblastic leukaemia after he became ill during the first Covid-19 lockdown, having already battled a brain tumour when he was just seven.

Almost immediately, he decided to start work on a book to help other young people as well as start fundraising for the Teenage Cancer Trust, having seen their amazing work first-hand.

With the help of his family and friends, Hamish has so far raised an incredible £25,000 for the charity with challenges such as building the Old Trafford football ground, the Harry Potter Hogwarts castle and the Millennium Falcon from Star Wars out of Lego in between bouts of chemo and treatment at The Christie.

On 9 October, Hamish stood on stage in front of hundreds of people – including his personal hero Paul Scholes – to tell them about the work of the Teenage Cancer Trust, receiving a standing ovation.

Now in its third event, this year’s ball at the Kimpton Clocktower Hotel (formerly the Palace Hotel) raised over £750,000 for Variety the Children’s Charity, the Teenage Cancer Trust, Mahdlo Youth Zone in Oldham and Wigan Youth Zone.

Hamish was last year named a joint winner of a Radio Manchester Gold Award for Triumph over Adversity for his charity efforts.

Hamish's current project is recreating James Bond's famous Aston Martin out of Lego; he also plans to tackle the Ghostbusters' car before the release of the new film.

Donations can be made via Hamish's JustGiving page here.