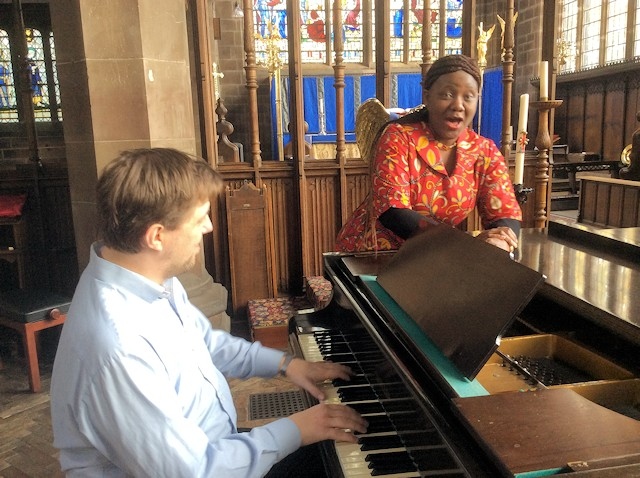 Margaret Ferguson was born in Ghana, West Africa - her great, great, great grandfather, Dr Samuel Ferguson, being a Scottish surgeon who married a Ghanaian lady and settled there. After gaining a music diploma and performing for ambassadors, high commissioners, and HRH Prince Edward, the British Council sponsored her for three years at The Royal Northern College of Music (RNCM). She also gained a Diploma at the European Mozart Academy, Poland, in 1997 and an external LLCM in 1999. She is now based in Manchester, luckily for us.

Margaret has sung several major solo opera and oratorio roles. She has sung solo in many major venues including the Royal Albert Hall, and the Royal Festival Hall, London, the Bridgewater Hall, Manchester, and the Symphony Hall, Birmingham, as well as various European cities and various tv and radio shows. She has performed over 1000 concerts for Music in Hospitals and is a member of their auditioning panel. She has raised thousands of pounds for various charities. She regularly sings with City of Manchester Opera and is Musical Director of Manchester Gospel Choir. She also teaches Ghanaian drumming, singing and dancing.

Margaret began her long-awaited return to St Mary’s with glorious sacred solos by JS Bach and Mozart and a concert piece by the latter. Following Liddle’s How Lovely Are They Dwellings she moved to the musicals with Romberg’s Desert Song and Meadow Lark from The Baker's Wife by Schwartz. The popular standard I'll Never Find Another You by Springfield provided much nostalgia and led to the up-tempo I'm Beginning To See The Light by Ellington and My Cousin In Milwaukee by Gershwin that were truly sensational.

Margaret is a gifted singer in many styles and a charismatic entertainer who gives her all and fully engages with her audience. Her many fans and friends would agree with the sentiments of her finale songs from The Greatest Showman: Never Enough and This Is Me.

Rochdale’s weekly midday music – the Toad Lane Concerts happen every Wednesday at 12.30pm at St Mary in the Baum, Toad Lane, Rochdale, OL16 1DZ. Entrance fee is £6. No refreshments available at the moment, but the venue is Covid-19 secure. Contact 01706 648872 for further information.