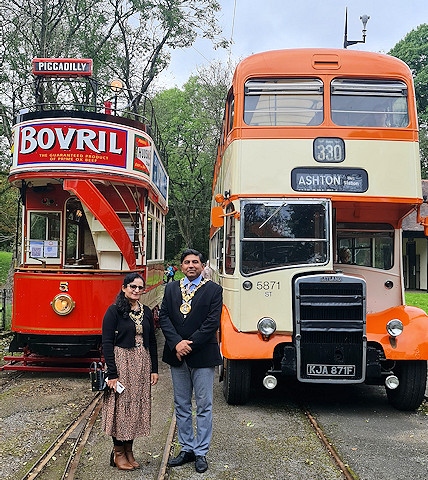 The Mayor and Mayoress of Rochdale, Councillor Aasim Rashid and his wife Rifit, were invited to the annual Greater Manchester Transport Heritage Mayoral Civic Day on 7 October

This weekly column is about the places he has been and the people he has met from Monday 27 September to Sunday 10 October.

The Lord Mayor of Manchester, Councillor Tommy Judge, visited the borough on Tuesday 28 September. He came to revisit his old school, Holy Family RC, where I joined him along with ward councillors. Councillor Judge said that whilst Lord Mayor, he hopes to be able to raise awareness for mental health in our service personnel and veterans, having previously served in the British Army Royal Armoured Corps himself.

I was invited to Healthwatch Rochdale’s volunteer thank you event on Wednesday 29 September where attendees enjoyed an afternoon tea style lunch and games at The Flying Horse Hotel.

Earlier this year, residents were asked to share their views on adult mental health services and on children’s and young people’s mental health services via two surveys developed by the local Healthwatch. Those who completed a survey were placed into a prize draw with the chance of winning a £50 voucher of their choice. I was honoured to draw the lucky winner of the surveys at the event.

Healthwatch Rochdale is a fantastic organisation that offers an invaluable service as the borough's independent healthcare watchdog, and I thank them for inviting me to this celebration. I encourage more residents to volunteer at Healthwatch.

Thursday 30 September was Hopwood Hall College’s graduation and awards ceremony at Mercure Norton Grange Hotel and Spa. The class of 2021 proved to have worked hard over a turbulent past 18 months as they were presented with certificates for successfully completing their higher-level courses.

On behalf of the Rochdale borough, I would like to congratulate all the graduates and wish them every success in the future.

Friday 1 October was the 61st Nigeria Independence Day and the Rochdale Nigeria Community Association organised celebrations to mark the occasion. A flag raising ceremony took place at Number One Riverside and a Festival of African Arts, Culture and Dance was held at Touchstones, which also celebrated Black History Month.

The event was a great opportunity for residents to come together to showcase our cultural heritage whilst celebrating the richness and diversity of culture and creativity in our community, promoting unity and peace.

A fun time was had by all, and I thank Mary Adekugbe from the Nigeria Community Association for including the mayoress and I.

My first engagement for the next week (Monday 4 October) was a charity meeting with my mayoral charity committee. We discussed the upcoming MP’s Dinner, organised by Rochdale MP Sir Tony Lloyd, which will be held at the Norton Grange on Saturday 6 November.

The dinner has a non-political theme, will include three courses, and is open to anyone. Tickets are priced at £30 per person with all proceeds going to my local chosen charities this year - Springhill Hospice, Parkinson’s UK, Petrus Rochdale, Jolly Josh, and Rochdale Shopmobility.

Guest speaker for the night will be Sir Lindsay Hoyle (Speaker of House of Commons) who was elected as Speaker on 4 November 2019. More information about the event and how to book tickets can be found here: 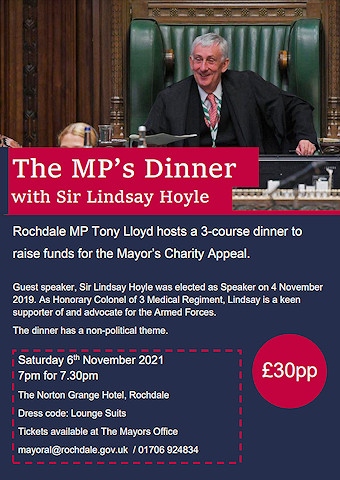 Springhill Hospice opened their new education unit at Carders Court, Castleton on Wednesday 6 October. The hospice has been providing palliative and end of life care education to all health and social care staff in HMR since 2015. As it has been so well received and reviewed, the hospice needed a larger premises, specially to ensure social distancing between attendees.

Carders Court generously allowed them to use the unit, and with the additional rooms it means they can offer a wider range of educational sessions that will mean the knowledge and skills of care and nursing staff in the borough will improve the care that our more vulnerable residents receive.

Thank you to Bloomcare (owners of Carders Court) and all the people that have helped get this unit ready. I was honoured to officially cut the ribbon to open it and hope it will provide a very useful space for as long as it can.

I went to Castleton Primary School to talk to pupils about the role of the Mayor of Rochdale and gave them a speech and presentation on democracy later on Wednesday (6 October).

This is a great initiative that the mayor is invited to do annually to promote our democracy locally and nationally. It is important that children have an idea of how members are elected and learn about politics, but I was already very impressed by how knowledgeable they were.

I hope I was inspiring and helped give an insight into my role as the mayor.

The annual Greater Manchester Transport Heritage Mayoral Civic Day was arranged for Thursday 7 October after being cancelled twice last year due to Covid-19. The mayoress and I assembled at the Greater Manchester Museum of Transport in Manchester along with the other GM mayors to start the day. We toured here before visiting Manchester’s Science and Industry Museum, then travelled to Heaton Park for a visit to the tramway.

It was then back to Rochdale to visit the newly opened Fireground museum (formerly Greater Manchester Fire Service Museum) where in addition to a tour of the building, refreshments were served. I was proud to say this was in my home of Rochdale.

The mayoress and I finished the week at Her Majesty’s (HM) Judges Service with Borough Solicitor, Asif Ibrahim on Sunday 10 October. This is an annual service to mark the beginning of the legal year held at Manchester Cathedral with all local authorities invited.

I met the new Chief Constable of Greater Manchester Police, Stephen Watson, at the event. I wish him the best of luck in his plans for the future improvement of GMP.