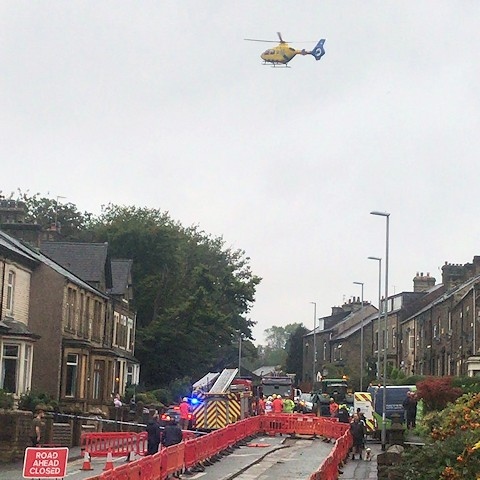 A fundraiser has been launched for the families of the two Electricity North West engineers who were killed and injured in a collision on Sunday (17 October).

Two electrical engineers had been working on the pavement on Featherstall Road when a vehicle came off the road and collided with them. Sadly, despite the efforts of emergency services, one man in his 30s was later pronounced dead at the scene whilst a second man in his 20s was taken to hospital in a serious condition.

The fundraiser, started by Paul Black, of Littleborough, has already raised over £2,500 in its first 24 hours.

Mr Black wrote: “I’ve started this page to raise funds for the two individuals that were sadly involved in the accident on Halifax Road [sic]. Unfortunately, one individual has sadly passed away.

“The two men, along with other colleagues, were working hard on a Sunday and didn’t expect a day to end like this.

“Any donation will go directly to the two families involved split equally and I’m hoping this will help in the smallest way.

“Thoughts from the community I’m sure will be shared to the two families involved.”

In a statement, Electricity North West said: “It is with great sadness that we can confirm that the serious road traffic incident in Littleborough has resulted in the fatality of one of our colleagues, and injury to another, who were working on site.

“Customers’ power supplies were removed in the area for safety reasons while we supported emergency services. Our thoughts are with our colleagues’ families and friends at this traffic time.”

Anyone with information, or anyone who may have dash cam footage of the 11.47am collision is asked to contact GMPs Serious Collision Investigation Unit on 0161 8564741 quoting log number 1338 of 17 October 2021.

Anyone wishing to donate can do so via GoFundMe.