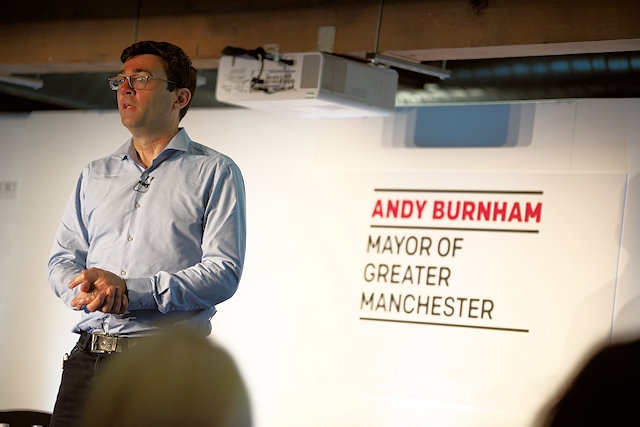 The Mayor's Question Time is returning to Greater Manchester for the first time in 18 months, following an extended break during the coronavirus pandemic.

The first event will take place on Thursday 28 October in Bury, at the Fusilier Museum on Moss Street, with the Mayor's Question Time returning to Rochdale in December.

Andy Burnham was first elected in May 2017 and made a commitment to talk to the people of Greater Manchester regularly about the issues that affect them.

From June 2017 to February 2020, 26 Mayor’s Question Time events were hosted at venues across Greater Manchester, with over 2,000 people attending in total. During the events, the Mayor is grilled by an independent member of the media – who takes the questions from the public, about a range of issues that he is responsible for.

Issues that have been raised have been far-reaching, from accessibility on public transport, to concerns around future development, to ideas for helping to tackle homelessness and rough sleeping in Greater Manchester.

Andy is regularly joined by local leaders and chief executives from other public sector organisations, so those attending also have the opportunity to ask these key decision-makers their thoughts on services, including police and crime, transport, and health and social care.

Mayor of Greater Manchester, Andy Burnham said: “Mayor’s Question Time has always been a great opportunity for me to listen and hear about the things that are important to communities across Greater Manchester.

“They’ve also been an opportunity for local people to hold me to account, by posing the questions that matter to them, their neighbours and their communities, and to have an open conversation about how what I can do to help.

“The last 18 months have been tough, but I’m looking forward to seeing people at these events over the next few months, right across Greater Manchester.

“We’ve been to Bury for Mayor’s Question Time three times over the last few years and have held a Question Time in every district in Greater Manchester. We’ve always had a really engaged audience with lots of interesting questions, so I’m really looking forward to being back.”

Free tickets for the Question Time event at 7pm on Thursday October 28 in Bury are now available on Eventbrite and questions can be submitted to QuestionTime@greatermanchester-ca.gov.uk.

Those who can’t attend in person can still submit questions via email and can watch a live stream of the event on Twitter at @MayorOfGM.

Over the next 12 months, Andy will host a Question Time event in each of the local authorities in Greater Manchester. Question Time will be held in Oldham in November, and Rochdale in December.