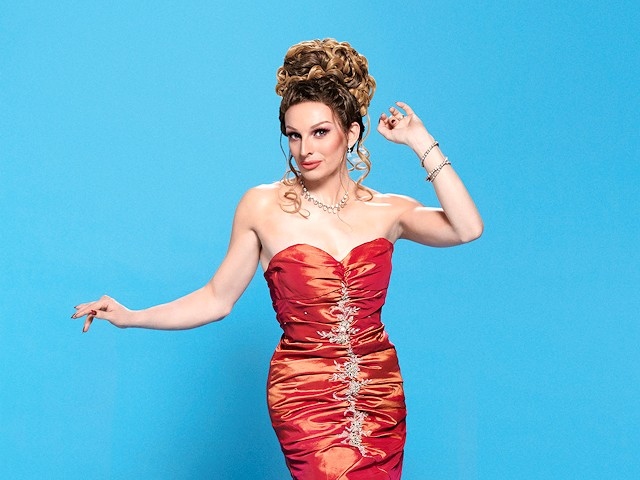 Veronica - real name Kevin Grogan - found herself in the bottom two of the week after failing to impress the regular judges and special guest judge, Bridgerton and Derry Girls star Nicola Coughlan, for episode three’s main challenge which aired on 7 October.

For the 'Hello Campers' first look, Veronica Green took inspiration from 'I woke up like this' at a festival, wrapping herself in two black sleeping bags made to resemble a 'fashion silhouette' dress, paired with heeled wellies and a dishevelled ginger wig.

With the aim of symbolising ‘coming out of a depression to be reborn’, Miss Green later adorned black face paint to contrast a multicoloured garment, mirroring a colourful butterfly, for her second look 'Campfire Couture'.

During the judge's critiques, judge Michelle Visage commented how Miss Green’s first look was ‘halfway there, just not all the way there’, and her butterfly had ‘so much going on’ that you ‘don’t know where to look first’. Judge Graham Norton added Veronica had put in ‘so much work for so little result’.

“I’ve had a bit of a rough year and going through a depression in summer stripped everything away from me,” Veronica responded. “What I wanted to show you tonight was that through sadness there is happiness and there is light at the end of the tunnel.”

Back in the workroom, she reflected with her fellow queens: “I’m absolutely the bottom of the barrel. I got the worst critiques out of everyone. They thought the first look was really strong, but they didn’t get it and then my second look they thought it was just too much.

“I feel like I really did myself a disservice this week, I’ve got terrible time management issues, that is something that is always on my mind, and I felt like I helped quite a few people as well and now I’m thinking maybe that stopped me from at least being safe. I didn’t put enough energy into me and I’m paying the price for it.”

The Rochdale queen landed in the bottom two with fellow drag queen Vanity Milan, finding herself in a final ‘Lip Sync for your Life’ showdown.

Subsequently, Green was told to ‘sashay away’ [leave the competition] by host RuPaul. He commented: “Your wings indicate you have emerged from the ruins and here you are to inspire so many other people. I’m very proud of you.”

Veronica had also been a contestant in series two but was forced to drop out after testing positive for Covid-19. She was invited back to star on series three by host RuPaul, making her the first queen to appear in two seasons in the same year.

Read more: Veronica Green is back to battle it out to become UK’s next Drag Superstar in RuPaul’s Drag RacePublished: 31 August 2021

Sharing her frustration over leaving so soon the second time around, Veronica said: "Not like this! Not in this dress... and this wig. Oh no… I feel pretty devastated about leaving tonight, but I'm really proud that I came back and fought in this competition. I had a good ride and now it's time to get off. But there's always a bright side to a dark day. I'm proud to be a Ru Girl!”

Later, speaking to her combined followers of nearly 240k across Facebook, Twitter and Instagram, Miss Green said in a statement: “The last 18 months have been both the best and worst times of my life, but I can’t say enough how much I’ve loved being on RuPaul’s Drag Race UK.

“I’m so grateful to Ru and the entire production team for giving me this amazing opportunity, making my dreams come true and changing my life forever.”

A message to you all 💚💚💚 pic.twitter.com/UtcNiUN8su

New episodes of RuPaul’s Drag Race UK are available on BBC iPlayer, streamed via BBC Three, every Thursday at 7pm.