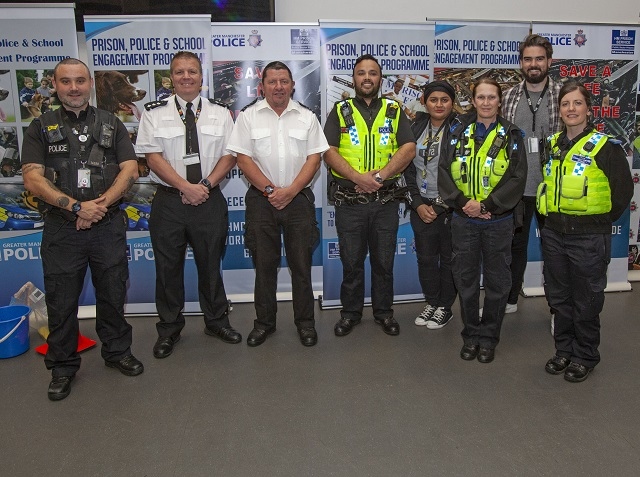 Four schools across the borough received a talk from the National Offender Management Service event, Actions Have Consequences, which aims to break the cycle of criminality.

Talks at Bowlee Park Primary School, Middleton; All Souls Primary School, Heywood; Kingsway High School, and Deeplish Academy, both Rochdale were delivered in the first week of October by an officer from Her Majesty's Prison (HMP), dog handler Paul McGovern MBE, and officers from GMP.

Prison Officer Paul McGovern MBE, from HMP Manchester, works within the Prison Community Team which engages with children in local schools to break the cycle of children being peer pressured into local crime gangs and subsequently being imprisoned when they are adults.

The aim of the Actions Have Consequences programme is to build bridges between local children, their teachers, local neighbourhood policing teams, school-based officers and the youth offending team.

The programme is carried out in a fun but serious way and covers 46 subjects, some of which include the realities of knife crime, gang wars, drugs, anti-social behaviour, relationship breakdown, and the real-life experience of being in prison.

Since it began in 2010, the programme has been delivered to over one million children throughout the country with the support of the local neighbourhood teams, school-based officers and the youth offending teams.

Prison Officer Paul McGovern MBE said: "I put a lot of energy into the day so it is quite tiring but if it stops one person from being killed or stops someone being imprisoned, the aim of the programme has worked.

"I do have to mention my two prison dogs G and J who also come along on the day. They always receive lots of attention but when I need a volunteer for someone to wear the sleeve - everyone goes strangely quiet.

"I have received positive feedback from those schools I have attended so I must be doing something right as I am always asked when I am coming back."

Chief Inspector Danny Atherton said: "We have worked with Paul and the programme for many years and find it is a valuable input for the young people of Greater Manchester.

“It is a powerful way to educate them as they approach adulthood, so they make the right decisions when a situation arises to keep themselves and their friends safe.

"I'm proud to support such an inspiring project and I'd like to thank everyone that works hard to make it happen. Sadly, these examples and situations are some people's reality, but by sharing them we hope they will make good choices in the future and speak to ourselves if they need help."

Deputy Mayor of Greater Manchester Bev Hughes added: “We are committed, not only to strong enforcement against violent crime, but also to trying to prevent it happening first place.

“Greater Manchester’s Violence Reduction Unit takes a public health approach to violence reduction; this means focusing on understanding what lies behind the problem, the root causes, on testing and evaluating interventions to find out what works best, then and delivering those interventions more widely.

“Interventions such as the Actions Have Consequences programme help to build positive relationships between children, their teachers and the police.

“By working with young people, families and communities we can understand and address the reasons how and why people, particularly young people, can get drawn into violent crime.

“If we can turn young people away from violence at the earliest possible opportunity we can make a real difference to them and our communities."