You are Here: Home » News » News Headlines » Police in Rochdale have made 17 arrests as part of a crackdown on burglaries 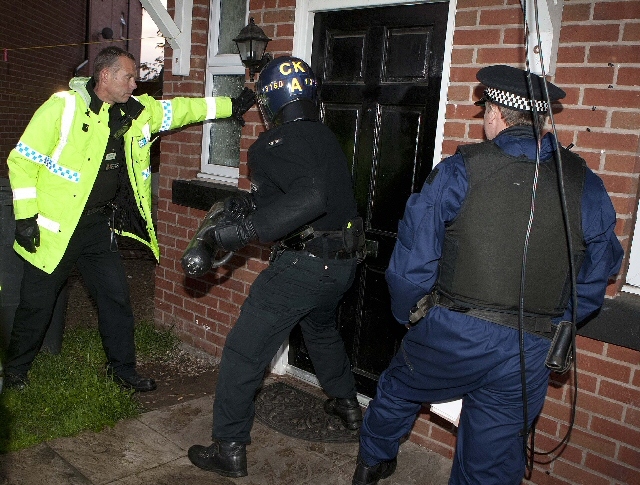 Police raids as part of investigation into burglaries (stock photo)

As part of a week of action targeting burglaries, officers from the Rochdale Neighbourhood Task Force, following intelligence and forensic work, conducted a number of warrants in Rochdale, Oldham, and Moston, relating to a number of burglaries that happened across Rochdale between July and October this year.

Seventeen people, aged between 14 and 50, were arrested on suspicion of burglary offences. Of those, sixteen have been charged.

Ten of them have either been bailed, or released under investigation while enquiries continue.

"However I want to be clear - whilst this was a week of action, our enforcement activities will continue. The Rochdale Neighbourhood Task Force now has responsibility for investigating all burglaries in the Rochdale area, and we will pursue every line of enquiry to bring offenders to justice, and provide reassurance to our communities.

"We will continue to investigate those who have been released on bail or Under Investigation, many of these offenders will be charged in the days and weeks ahead.

"This week also sees the launch of Operation Ulysses, where identified burglary offenders will be pro-actively targeted by all officers in Rochdale, in order to disrupt their activities, gain intelligence and ultimately arrest.

"I am committed to reducing the number of burglaries reported, placing offenders before the courts and increasing our detection rates."

This week of action comes as part of Operation Castle, GMP's forcewide response to tackling burglaries from both a residential and commercial perspective.

The operation has been in place for a number of weeks, and has already seen results across districts.

Superintendent Dave Pester, GMP's force tactical lead for Operation Castle said: "We'd like to reassure residents that we want to prevent burglaries happening in the first place however when a burglary does happen, we will attend wherever possible.

"Burglary is one of the most intrusive forms of crime a person can experience - whether it's your home, your school, or the business you've created. This is why Operation Castle has been developed and I'd like to reinforce our commitment to deploying a police officer to every burglary - whether that is residential or elsewhere in the community.

"This new renewed commitment for GMP means that we will actively be targetting burglary offenders, arresting them and bringing them to justice because we know the misery they can cause to our communities.

"For every burglary reported to ourselves, we are prepared to take robust action to fight this high impact crime and every report will be investigated - utilising a full range of assets from across the force including from our forensic teams to identify offenders where possible and delivering support crime prevention advice as well as victim support."