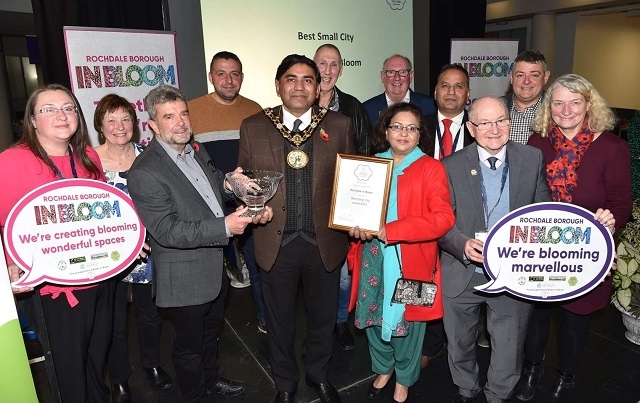 Rochdale has pulled it out of the bag yet again in this year’s North West in Bloom Awards after judges deemed its floral displays and outstanding parks the pick of the bunch.

After what can only be described as a tough year, the council and community volunteers were back scooping eight impressive gold awards across Rochdale, presented by Bernard Pendleton, chairman of North West in Bloom at an awards ceremony at Number One Riverside, Rochdale on Thursday 4 November.

The Rochdale in Bloom group were judged gold winners in the ‘small city’ category and ‘best town centre’ in the North West.

A new entry this year saw judges visit five Rochdale mosques for the Masjids in Bloom initiative. Supported by Rochdale Council of Mosques, the five masjids – Neeli, Central, Golden, Jalalia and Bilal were visited with the Bilal mosque taking top spot after judges were wowed by the attention to detail, environmental efforts and splash of colour.

A special trophy for outstanding contribution was presented for the very first time to Mr Asrar Ul-Haq, from the Amaani Initiative. The Bill Blackledge MBE Chairman’s Award was presented to him in recognition for his work in the local community and Masjids in Bloom.

Norden in Bloom, which entered as a stand-alone village this year, captivated visiting judges claiming a ‘best newcomer’ award and a gold medal for ‘large village’, which can only mean bigger things to come for 2022.

There were also awards for delightful displays and high levels of maintenance at Denehurst Park, taking a silver gilt award in the ‘large park’ category. Kirkholt also took a silver gilt in the ‘urban community’ award.

The Stoney Hill community wildlife area took the best 'biodiversity award' in the North West, the special Frank Holgate Award with a silver cup as trophy.

Zen Internet took gold for ‘best small industrial park’, and local resident Luca Higginson won the ‘young bloomer of the year’ prize for his work on the Caldershaw wildflower meadow.

“The original plan for 2021, after all the recent restrictions, was to try and maintain our standards. But the fantastic efforts by the volunteers and council staff mean we have surpassed this and actually increased our gold medal haul of previous years.

“New initiatives like the Mosques in Bloom have really put our town on the map. I am so proud of what we have achieved and I work with an amazing group of people.”