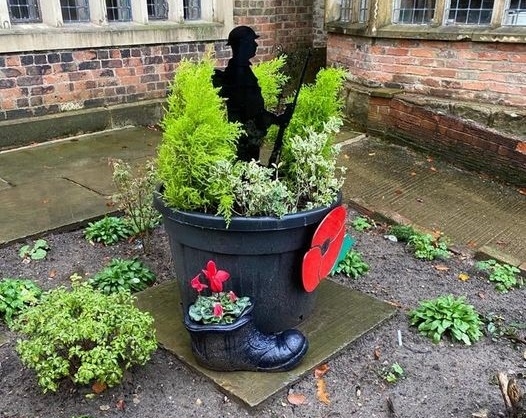 Pam Taylor and Janet Beaumont are the driving force behind the lovely display: Janet donated the silhouette of the soldier and they both designed the simple, but significant, remembrance display.

A few months ago, the volunteer gardeners at Hopwood Hall Estate had a discussion about how they might dedicate a part of the garden to remember the two Hopwood Hall family sons who were both tragically killed in action in World War One, Lieutenant Colonel Edward Byng George Gregge-Hopwood and Capt Robert Gerald Hopwood.

Both sons died serving their country, along with 20 servants from the hall.

After trying to find out the names of the staff who had died, the volunteers discovered that one of them, John Thomas McGuire, was a gamekeeper at the hall: he was killed fighting in Mesopotamia. His relatives still live in Middleton today, including his daughter, Margaret Finney.

A spokesperson from the hall said: “We would love to hear from anyone who might be able to name those other remarkable people who died so that their incredible sacrifice is not forgotten.”

Anyone who thinks they can help name some of the other staff who sadly died during the war can get in touch via email.