You are Here: Home » News » News Headlines » NHS Blood and Transplant is calling for plasma donors to step forward in the UK 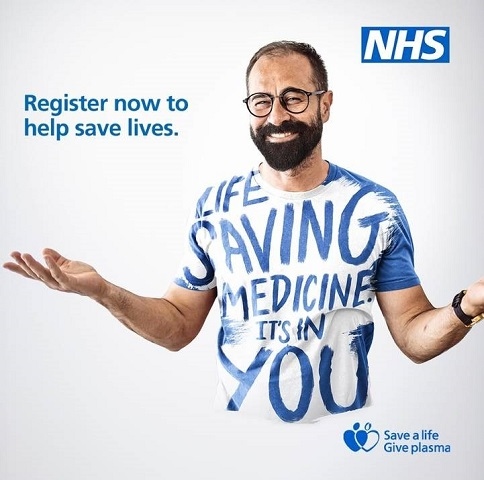 Blood plasma donations are being collected in England for the first time in 20 years, and NHS Blood and Transplant is urging people to donate with a new appeal.

Plasma makes up 55% of blood and carries cells and proteins including antibodies around the body. It is essential in treating a number of diseases and disorders including cancer, kidney disease, Sickle Cell Disorder and primary immunodeficiency (PID).

There has been a 31% increase over five years in the number of people with primary immune disorders receiving immunoglobulin, an antibody medicine made from donor plasma, due to better diagnosis and the treatment, enabling people to live for longer.

The NHS relies on imported immunoglobulin, but global supplies are under long-standing pressure due to rising demand around the world. The pressure has increased due to coronavirus affecting donation in the US.

NHS Blood and Transplant was this year asked to start taking plasma donations to bolster long-term NHS supplies, but the number of donors is far behind target.

Plasma from UK donors could not be used for medicines between 1998 and 2021 as a vCJD (Variant Creutzfeldt–Jakob disease, or ‘mad cow disease’) precaution but the restriction was lifted this year after the independent Commission on Human Medicines decided it could safely restart.

30,000 more donors are needed by the end of March, to improve long term supply as plasma takes at least six months to make into immunoglobulin.

However, new plasma donor centres – including the one in Manchester (Plymouth Grove near Manchester Royal Infirmary) – are only 30% full.

Around 350 appointments are going empty a day; NHS Blood and Transplant says numbers are low because plasma donation for medicine is new to most people.

Plasma donation is similar to blood donation. In plasma donation, some of your blood is gradually run through a machine which separates out some of your plasma. Your red blood cells are returned to you, so you can carry on with your day as normal.

Maria Caulfield, Minister for Primary Care and Patient Safety, said: “Thousands of people across the country with rare conditions are in need of life-saving medicines, made from plasma.

“It’s not often you have the opportunity to help save a life – and, just like donating blood, taking some time of your day to donate plasma is a simple, easy way you can help save someone’s loved one.

“I urge people to play their part; every contribution means more medicines can be provided to vulnerable people in the long term.”