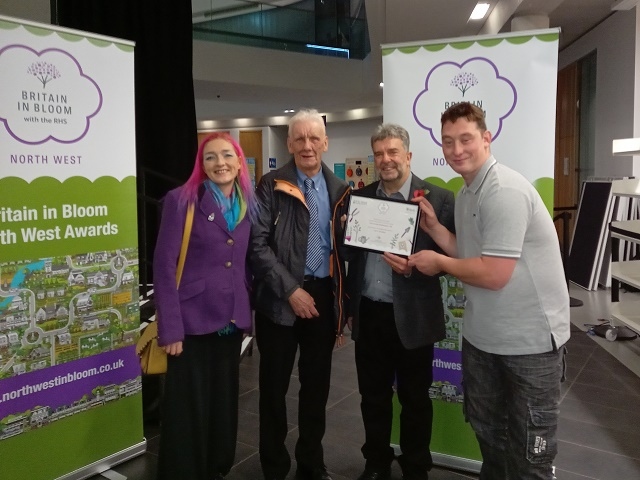 Volunteers from Petrus Incredible Edible Rochdale have been awarded the highest possible level in the ‘It’s Your Neighbourhood’ awards category as part of the North West In Bloom awards.

This was Petrus Incredible Edible Rochdale's fourth year attending the awards, and volunteers have worked year-round each time to prepare for the judging which takes place in August; focusing all their energy in hopes for the top score.

It was a very proud moment when In Bloom Chair Bernard Pendleton presented volunteers Ken and Nathan, Service Manager Rachael and Engagement & Development Worker Roy with the award.

PIER volunteer Nathan, who is taking part in the Project 5 training offer said: “Level 5 means just a lot for us really because we got Level 4 twice and we’ve put a lot of work into getting Level 5 Outstanding. And just basically to come on here [at PIER] and just get everything done, it’s just been amazing.”

Rachael Bennion, Service Manager at Petrus, said: “This is top marks for a top team. Just look at the photos of us accepting the award, you can see the pride on Ken and Nathan’s faces. That’s what it’s all about for us.

“It’s so great to have received this as it is recognition of the hard work that our volunteers do year-round, rain or shine, and scoring a Level 5 is the highest level of achievement showing the quality of the work we do at PIER as a community horticulture project.”

Rachael added: “Attending the awards not only provides a huge sense of achievement but also connects our service users to other volunteers and groups in the borough and from across the northwest which leaves us feeling inspired by the enormous impact that horticulture has in our communities.”

Ken and Nathan also got the chance to meet The Mayor of Rochdale Councillor Aasim Rashid and posed for a photo together with their award.

A spokesperson from Rochdale In Bloom said: “Petrus has been on our awards route for many years and for it to have won a Level 5 after the disruption of a pandemic, well the applause could be heard on Rochdale's borders!

“A huge well done to the team.”

Volunteers are now planning what they want to showcase for the allotment during next year’s judging and preparing activities for the Gaia Festival focused on the need for climate action.