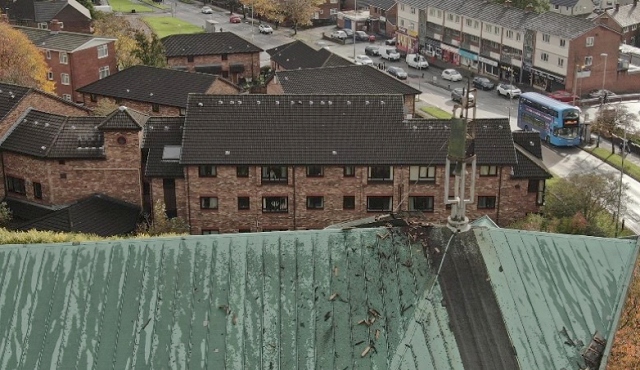 The church spire has collapsed

A crowdfunding appeal has been set up to fix a collapsed church spire in Langley.

The spire – known as a fleche – of the Grade-II listed All Saints and Martyrs Church on Wood Street collapsed on the last weekend of October, believed to be due to old age and bad weather. Fortunately, no-one was injured.

The fleche was inspected in June 2016, with the subsequent report saying that it was showing some signs of wear but no sign of rotting timber.

A photograph of the fleche, taken from the top of scaffolding on 28 July of this year doesn't appear to show any sign of instability.

The fleche came crashing down onto the roof of the church at around 8.10am on Saturday 30 October, the conductor piercing into the felt with the remainder being tethered via its lightning conductor strap holding it in place.

Concerns had been raised the prior day, with the church clergy and officers approaching contractors for advice and assistance. However, nobody was available to help at that time.

The church was evacuated, and the car park sealed off. More attempts were made to contact contractors, but without success.

The fire service was called, cordoning off footpaths before checking the internal roof for damage. This was declared safe, and firefighters called for a second specialist unit with an extendable ladder and cage, which eventually removed the fleche and debris from the east side of the roof.

Due to the possibility of the wind blowing debris from the roof into the surrounding areas, the hall access road, top porch and car park were left closed. Access to the church was instead provided by the bottom doors of the chapel link.

John Duffy, church warden, said: “First and foremost, we are extremely relieved that no-one was injured by any of the unexpected events of 29/30 October. The fire service, thanked by all concerned, left the scene at 12.45pm. What a sterling job; well done.

“Secondly, on behalf of everyone at All Saints & Martyrs Church, I wish to thank our friends and families in and around Langley for their generous financial support and acts of kindness following the devastating progressive collapse of the fleche.”

A contractor made the roof safe on 5 November, removing all loose debris and checking the bell housing for stability. By the end of the day, the roof was cleared, with full church access resumed from 6 November.

Further repairs were carried out on 10 November.

Mr Duffy added: “We required a report on the impact area described and the condition of the roof at the front end.

“Also, we requested them to apply as many repair patches as necessary to prevent water ingress into the building.

“First indications are the area of impact suffered only superficial surface damage, so the building was declared safe.”

The fundraiser has been started by the founders of local charity Cold Hands, Warm Hearts to help with repairs, which are estimated to cost around £2,250.

Mr Duffy continued: “The estimated cost implications to cover this work will be around £2,250 but we await the arrival of the steeplejack’s report and final invoice.

“The next phase will require careful consideration as the existing fleche is scrap and therefore is only fit for use as possible templating. A new specification, design and build will be required at some point in the future; it is too early to say how expensive this is likely to be.”

The church underwent a quinquennial inspection in 2018 by its architect who provided a written report on the condition of the buildings.

A structural engineer’s report was commissioned and issued in December 2019. As a result, one area of concern was addressed: the front of the church was repaired with 42 pieces of stained glass being replaced in the summer of this year.

All Saints and Martyrs Church became a listed building on 4 June 2021, and has now been put on the Building at Risk Register by Historic England.

Mr Duffy added: “It is hoped that we will be able to access external funding in order for this iconic building of ours to be conserved for future generations.”

Donations can be made via the JustGiving page here.