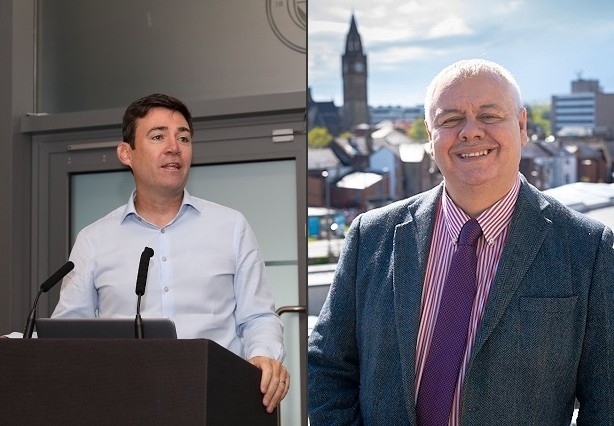 Northern leaders have written to the Prime Minister, outlining their concerns over the government’s Integrated Rail Plan.

The new high-speed HS2 railway had been expected to directly connect Manchester, Leeds, Birmingham and London.

Now, after years of planning and investment, the eastern leg of HS2 – the East Midlands to Leeds – has been scrapped – despite prior government pledges that the high-speed route would be built.

And plans for the Northern Powerhouse Rail east-west high-speed line have been downgraded. This network was proposed to link both east and west coast main lines with HS2.

However, the government has now said there will not be a new line between Manchester and Leeds. It claims it is still delivering the Northern Powerhouse Rail through additional investment and upgrades.

Instead of fully electrifying the line, only sections between Liverpool and Warrington, Leeds and the Standedge tunnels, and Leeds and Bradford will be upgraded.

The letter from political and business leaders say they are “concerned” that Boris Johnson has “failed to fully consider the advice of independent rail reviews, the ambitions of northern leaders, and the appeals of our businesses.”

They go on to say that this decision is “contrary to ambitions to level-up the north” run the risk of “holding back our regional economies and compromising our plans to cut carbon emissions, just days after we hosted COP-26.”

The letter continues: “People across the North were excited by your promise of new rail infrastructure and the benefits of a better-connected North – not only quicker travel times but more jobs and homes, new investment and regeneration, and better opportunities for our young people.

“In our view, this pared-back plan will not unlock the full potential of the North of England.

“These decisions go beyond party politics and indeed our generation. They are critical to the future of the North for the next 100 years and more. Given this, we believe elected representatives in all parts of the country should have an opportunity to consider whether your proposals represent a fair deal for their constituents before they are finalised.

“We are therefore asking you to call a free vote on these plans in Parliament. We look forward to your response.”

The letter has been signed by the Mayors of Greater Manchester, West Yorkshire, South Yorkshire, Liverpool, Liverpool City Region and the North of Tyne, as well as council leaders across the North, including Rochdale’s Neil Emmott.

Councillor Louise Gittins, Interim Chair of Transport for the North, who has signed the letter in her role as leader of Cheshire West and Chester Council, has called the plan “woefully inadequate.”

She said: “Today’s announcement is woefully inadequate. After decades of underfunding, the rail network in the North is not fit for purpose.

“It is largely twin-track Victorian infrastructure trying to cope with the demands of a 21st century economy. Leaders from across the North and from across the party-political divide came together to ask for a network that would upgrade the North for this century and in line with the rest of the country. Our statutory advice asked for an over £40 billion network, but the government has decided to provide even less than half of that.

“The leaders of the North, jointly with government, have worked hard to come up with an evidence-led plan to help reverse the chasm of under investment over the last four decades to give passengers in the North a railway network fit for today and for generations to come.

“That doesn’t mean a bit here and a bit there of minor upgrades to the existing network. It means transformational change for the whole rail network. That means building HS2 and Northern Powerhouse Rail in full. That means good east-west connections, improved reliability and a better customer experience to bring about modal shift to meet our decarbonisation strategy.

“If we truly want to level up the country we don’t need words and promises. We need commitment. We need investment. We need government to make good its pledge to the North and to deliver funding so we can deliver value back into UK PLC.

“We will be studying today’s Integrated Rail Plan announcement closely and will consult with our TfN board before giving our considered response.”