You are Here: Home » News » News Headlines » PCSOs come to the aid of vulnerable man in Rochdale

PCSOs come to the aid of vulnerable man in Rochdale 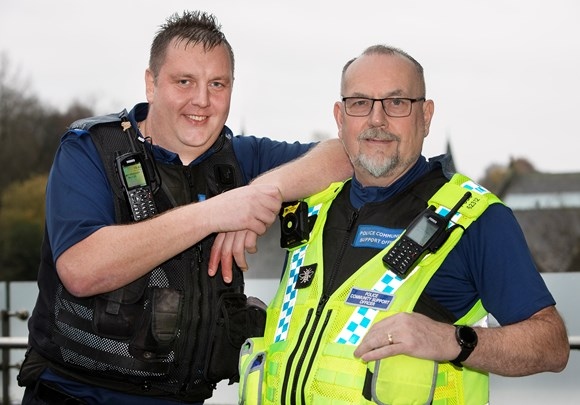 Two Greater Manchester Police PCSOs have 'gone above and beyond' after checking on the welfare of a vulnerable man in Rochdale, taking him shopping and delivering a television and washing machine.

PCSOs Colin Taylor and Paul Dawson were checking in on the man in the Firgrove area after a call from a concerned relative.

Once inside his address, they realised the 68-year-old man was struggling to care for himself.

Rochdale Neighbourhood Sergeant, PS Matthew Honey said: "They could see the man had no food in his fridge so they took him shopping on their own lunch hour instead of taking a break.

"They drove him to the shop, helped with the shopping and the trolley inside, and then drove him back to his address.

"They have also passed on crucial details so that the correct agencies can help him going forward.

"They really have gone above and beyond the call of duty but that is nothing less than I would expect from my team.

"Acts like this are not a one-off and we are committed to helping the most vulnerable people on our beats."

The PCSOs have been back to see the man, delivering a television and washing machine donated by a member of the public.

PCSO Dawson said: "We treated him as we would want our own families to be treated.

"We heard that he didn’t feel up to going out but when we offered to take him, he lit up and it clearly touched him.

"For us, this is our bread and butter and serving the community is the most rewarding part of the job.

"Our referrals to other agencies will now ensure he has everything he needs."

The man's sister, who wishes to remain anonymous, described the PCSOs as 'angels'.

She said: "I can't praise them enough - they knew he needed some help and didn't hesitate.

"They still go back and see him every other day to check up and make sure he is okay."

Chief Inspector Danny Atherton, of GMP's Rochdale district, said: "I am really proud of our PCSOs and how caring and considerate they have been. Little acts of compassion can go a long way."