You are Here: Home » News » News Headlines » Volunteers raise £5,000 after swapping warm beds for a sleeping bag outside

Volunteers raise £5,000 after swapping warm beds for a sleeping bag outside 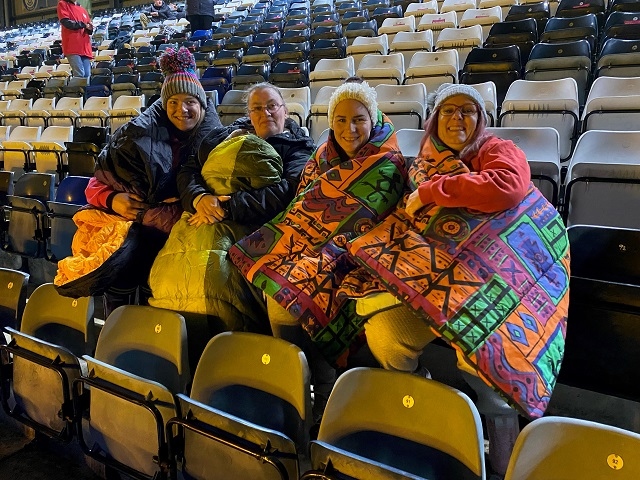 Volunteers braved the elements to raise money for the homeless

Most of us don’t worry about where we’re going to sleep for the night, knowing we have a comfortable warm bed awaiting whenever we’re tired. But whilst most borough residents will have been tucked up safe and cosy on Friday night, a team of volunteers swapped their beds for a cold night of rough sleeping.

Around 25 people braved the elements at the Crown Oil Arena on the night of 19 November, where temperatures had fallen to single digits.

Their4U Fundraising – the fundraising aim of the Rochdale AFC Military Veterans team – organised the rough sleep to raise funds for Dale in the Community Sports Trust and Helping Homeless Veterans UK, with an initial £1,000 goal.

And, like so many of the homeless they were raising money for, their only luxuries were a sleeping bag and some cardboard, with the extra privileges of a safe environment and enjoying hot food, courtesy of the Flying Horse Hotel.

The volunteers have smashed their fundraising goal, raising more than five times the original target.

Adam Trennery, the manager of Rochdale AFC Military Veterans, said: “I would just like to say a massive thank you to everyone who attended and braved the elements, it is greatly appreciated.

“The funds raised will go towards Helping Homeless Vets UK and Dale in the Community Trust who both do amazing work locally and nationally, not only for homeless veterans but also for those in need who aren't as fortunate as we are, from putting food on the table to giving shelter and somewhere safe to sleep and live.”

Adam plans to hold the rough sleep annually as well as hosting several other events throughout the year for different local charities.

Donations can still be made via GoFundMe until Saturday 27 November.