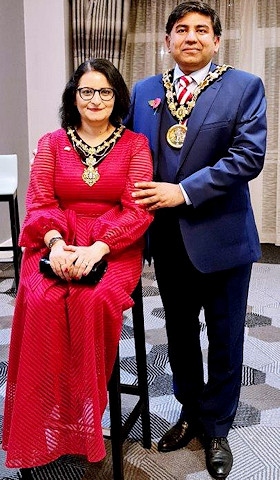 The Mayor and Mayoress of Rochdale, Councillor Aasim Rashid and his wife Rifit, at the annual MP's Dinner on 6 November hosted in aid of the Mayor's Charity Appeal

This column is about the places he has been and the people he has met from the week commencing Monday 25 October to Sunday 14 November.

I started the next week with the Ex-Mayor’s Dinner at the Norton Grange on Monday 1 November. This is an annual dinner organised by an ex-mayor of Rochdale, who invites other fellow ex-mayors and the current mayor to catch up over a meal and drinks.

Thank you to Councillor Ray Dutton, who was Mayor of Rochdale from 2016 – 2017, for organising the three-course dinner which was well attended by former mayors, mayoresses and mayor's consorts of the borough. Former mayors that are not here with us anymore were also remembered on the evening.

The next event was very exciting. Little Amal – a nine-year-old refugee girl in the form of a 3.5 metre puppet – walked through Rochdale on Tuesday 2 November. She has travelled from the Syrian border across Turkey, Greece, Italy, France, Switzerland, Germany and Belgium in search of her mother, stopping at 65 places on the way, including Rochdale, where I gathered with the crowds to greet her.

I officially welcomed Amal in Rochdale Memorial Gardens where I presented her with a copy of the heartfelt poem ‘Why Rochdale?’ written by Middleton resident Ann Robinson. Others present in the gardens included Rochdale singer Lisa Stansfield and pupils from nearby primary and secondary schools and colleges. Music and entertainment was also provided by local bands and groups before the visit concluded and Amal moved to the next step of her journey - a community event at Kingsway Park High School.

I hope everyone enjoyed seeing Amal on her visit to our town.

Tuesday evening (2 November), people of all faiths and none were welcomed to a service of Remembrance and Thanksgiving at St Chad's Church. Led by the Rt Revd Mark Davies, Bishop of Middleton, we remembered all those that sadly passed due to Covid-19 and thanked those that cared for loved ones during this time. Rev Canon Anne Edwards spoke about her experience as a hospital chaplain during these times and Revd Matt Sanderson, a paramedic, then led the prayers.

A display can be found in the church which remembers those who have died of Covid-19 in the Rochdale borough, with each life being represented by a small white heart which has been decorated by a child from St. Peter's Church of England Primary School and Broadfield Community Primary School.

Thank you to St Chad’s for organising this service and to the children from St Peter’s and Broadfield Primary Schools for their time and effort working on the beautiful display. It is a very fitting tribute to those we lost locally during the pandemic.

Thursday (4 November), myself and my wife, Mayoress Rifit Rashid, were invited for a tour of Springhill Hospice followed by a delicious lunch. The hospice is an amazing place; all the employees and volunteers work extremely hard in our borough, and I am so glad that I can support them as one of my chosen charities this year.

Held on the ground floor at Number One Riverside, it was the North West in Bloom awards in the evening. The awards celebrated local In Bloom groups efforts, working with the talented community groups that make our borough so ‘blooming’ wonderful.

All award winners were presented with certificates by North West In Bloom judge Bernard Pendleton, and I thoroughly enjoyed celebrating the towns achievements.

With a non-political theme, the annual MP’s dinner was hosted at the Norton Grange on Saturday 6 November by Rochdale’s MP, Sir Tony Lloyd. A night hosted in aid of my charity appeal; attendees enjoyed a 3-course dinner before hearing from guest speaker Sir Lindsay Hoyle - Speaker of the House of Commons. Sir Hoyle was elected as Speaker on 4 November 2019 and as Honorary Colonel of 3 Medical Regiment, he is a keen supporter of and advocate for the Armed Forces.

The night was very well attended, which I am very grateful for, and a substantial amount of money was raised for Springhill Hospice, Parkinson’s UK, Petrus Rochdale, Jolly Josh and Rochdale Shopmobility. Thank you to all who bought a ticket and came along, to Sir Tony Lloyd for hosting the dinner and to Sir Lindsay Hoyle for honouring us with his attendance.

The Mayor and Mayoress of Stockport, Councillor Adrian Nottingham and Mrs Diane Nottingham, invited the Mayoress and I to their Civic Reception on Sunday 7 November. The reception was in the form of an afternoon tea in the Ballroom at Stockport Town Hall with entertainment also provided. The event was a chance for attendees to support the Stockport Mayor's Charity and to boost the work of Sector3 in Stockport (an organisation which helps homeless people). Thank you to the Stockport Mayor and Mayoress for inviting us and I hope you raised a lot of funds towards your worthy causes.

The next week (Monday 8 November) I was invited to Manchester Cathedral to celebrate a decade of Near Neighbours which brings people together in communities that are religiously and ethnically diverse so that they can get to know each other better, build relationships of trust, and collaborate on initiatives that improve the local community they live in. The local co-ordinator for Rochdale is Samra Kanwal.

As the 10-year celebration was also hosted close to Interfaith Week 2021, it was opened with an official welcome from local faith leaders, followed by a showcase of the work of Near Neighbours in Greater Manchester. This was a great event as it provided an opportunity for everyone to network with a whole range of diverse grassroots community groups and community leaders from across the region. Congratulations to Near Neighbours – may you continue to provide your services for another ten years and beyond.

Services to mark Armistice Day were held at Rochdale Cenotaph and in other parts of the borough on Thursday 11 November. Before the service, I attended the weekly Veteran’s Breakfast at Touchstones. It was lovely speaking to all the veterans, hearing their life stories is always fascinating, and the breakfast club really is a good initiative in Rochdale as it allows the armed forces community to come together every week to catch up and enjoy one another’s company.

With traditional Remembrance Day services and parades cancelled last year due to Covid-19 it was great to see members of the public, including veterans from the Navy, Army and Royal Air Force, gather once again to honour those who have made sacrifices in defence of the country.

Remembrance Sunday is always an emotive and reflective day as we come together, united as one, to pay tribute to our Armed Forces community. Without the selfless dedication and sacrifices of our Armed Forces personnel, the values and liberty we value so much would have been lost. Countless generations owe them a great debt, which is why the mayoress and I were so proud to lay wreaths across the borough on Sunday 14 November in their honour.

It was particularly moving to see residents of all ages paying their respects at services across the borough. We never forget; we will remember them. 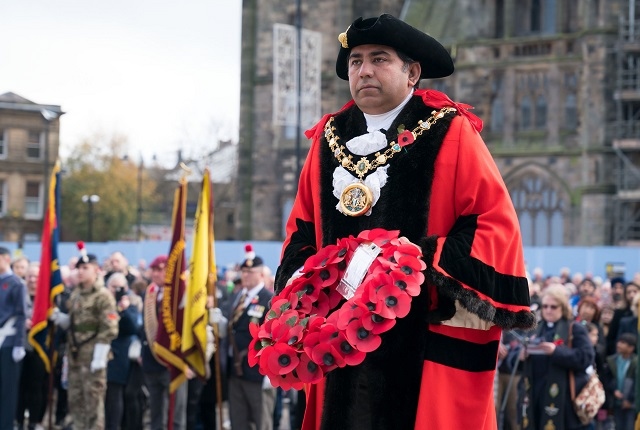 The Royal Regiment of Fusiliers Inkerman lunch was hosted on Friday 12 November in Bury. The Battle of Inkerman took place during the Crimean War, on 5 November 1854, between the armies of Britain, France and the Ottoman Empire against the Imperial Russian Army. The 20th Regiment, later the Lancashire Fusiliers and now the Royal Regiment of Fusiliers, fought in this battle which broke the will of the Russian Army. Due to the foggy conditions, the troops fought mostly on their own initiative and the battle is known as ‘The Soldier's Battle’.

Hosted by Colonel Lancashire and other senior Fusiliers, I was delighted to be invited to the luncheon to commemorate the battle which took place over 160 years ago.

I travelled to Bowden Synagogue in Manchester on Saturday 13 November for the annual Civic Remembrance Service along with other mayors and dignitaries from across Greater Manchester. The event offered community cohesion, respect for all and the freedom to practise faiths and lifestyles whilst paying respects to those who fought for our country. It was a fine example of bringing faiths together and remembering our past in order to create a future. I was glad I could be a part of it. Thanks to all at the synagogue for the invitation and hospitality.

With Wing Commander David Forbes DL, the mayoress and I visited Poppy Appeal stalls on Saturday afternoon to show our respect and gratitude for the time and effort of all the volunteers who take part in the appeal collections every year. A big thank you to ASDA, Tesco, Morrisons and Rochdale Exchange for allowing collections in their buildings.

The Poppy Appeal is the Royal British Legion's biggest fundraising campaign held every year in November, during the period of Remembrance. The charity provides lifelong support to serving and ex-serving personnel and their families. 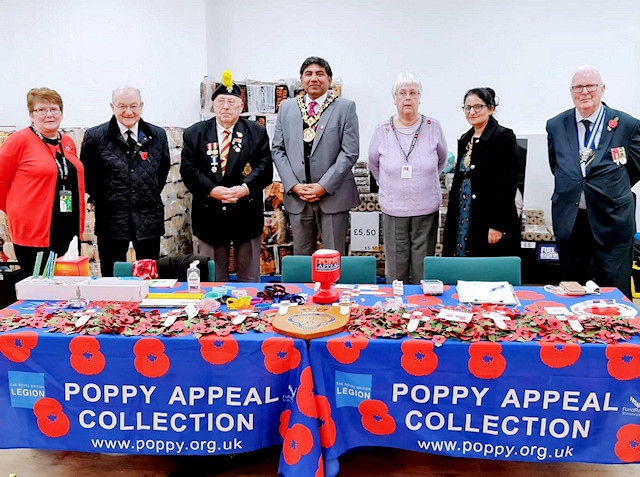 There is a brilliant art display in the Rochdale Exchange shopping centre constructed by local children which displays different pictures, paintings and poems relating to Remembrance Sunday and the World Wars. Town centre chaplain, Revd Margaret Smith, organised the display which can be found near WHSmith in the Exchange.

Finally, I attended Rochdale AFC's official game of Remembrance against Leyton Orient at the Crown Oil Arena later on Saturday (13 November). I attended along with councillors, the Rochdale AFC Military Veterans team and Royal Fusiliers to pay tribute to those servicemen, women and former players who have fallen.

Before the match, bucket collections and poppy selling was conducted outside the stadium and in the hospitality areas in aid of the Royal British Legion. The Military Veterans team then formed a guard of honour before kick-off for both sets of players to walk through as they entered the pitch, before myself and other dignitaries laid poppy wreaths on the centre circle. Thank you to all who attended at the club to pay their respects.