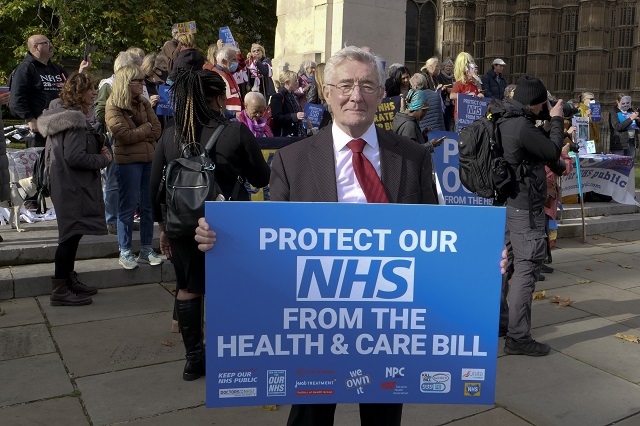 Concerns about privatisation of the NHS were raised by MPs in the House of Commons on Monday night (23 November), saying that the Health and Care Bill was the “biggest threat to the NHS" and “would lock in yet more privatisation in future”.

MPs debated on the Health and Care Bill, which proposes another reorganisation of the NHS, creating 42 new Integrated Care Systems (ICSs), each with its own budget and a board to oversee the delivery of health services for the area it covers.

The decision-making bodies within these systems are the Integrated Care Boards (ICBs), which will replace clinical commissioning groups (CCGs).

Outgoing Manchester City council leader Sir Richard Leese has been named as the new chair of the newly-established Integrated Care Board for Greater Manchester, which will comprise part of new NHS legislation which takes effect from the beginning of April 2022.

Rochdale MP Sir Tony Lloyd was one of five Greater Manchester MPs who last month joined calls outside the Houses of Parliament for the government to scrap plans to pass the Health and Care Bill, which has been dubbed the ‘Privatisation Bill’ by Unite the union.

He said: “People want the government to fix waiting lists and get a face-to-face appointment with their GP.

“What they don't want is to allow private companies to sit on the boards that oversee the new Integrated Care Systems and make decisions about how the budget is spent, which is what this law will allow.

“The Health Secretary needs to be focusing on things that matter – concentrating on Covid, sorting out social care, bringing down waiting lists and giving the NHS workforce the pay rise they deserve instead of rushing into a flawed, top-down reorganisation.”

The Health and Care Bill had its third reading in the Commons on Monday. Campaigners and trade unions say the bill is being used to bring in privatisation – echoed by opposition MPs – which has been labelled “misleading” by the government.

Speaking in the debate on Monday, Streatham MP Bell Ribeiro-Addy said: “Our NHS is really one of the best things about this country, but the bill is the biggest threat to it yet.

“It rolls out the red carpet for private companies, ramps up the government’s long-standing attempts to privatise the NHS, and makes easier what we have witnessed over the past 18 months: the awarding of contract after contract without a competitive process, and the rewarding of failing companies with new contracts again and again.

“The bill will be the destruction of our NHS as we know it, and will widen the inequalities that the pandemic has exacerbated.”

Leeds East MP Richard Burgon added: “This bill would lock in yet more privatisation in future, with even less scrutiny, because it means less transparency. It means private health giants getting an even bigger slice of the action with less scrutiny.

“Without making the NHS the default provider, that simply means that contracts can not only still go to private healthcare corporations but can do so without other bids having to have been considered.”

Justin Madders, MP for Ellesmere Port and Neston, said: “Since its inception, the NHS has always relied on some non-NHS providers, with the model developed for GPs being an obvious example. However, in recent decades there has been an increase in the use of private providers of acute care, most notably in diagnostics and surgery.

“To be clear, we on the opposition benches believe that the NHS should be the default provider of clinical services. If it is not the only provider, it should be the predominant provider in geographical and services terms. Where a service cannot be provided by a public body because the capability or capacity is not there, there is still the option to go beyond the NHS itself, but that should be a last resort and never a permanent solution.

“We need the rigour set out in the amendment to be put into legislation, rather than left to guidance. We need to be able to challenge NHS bodies that do not comply, as well as ministers who try to flout the rules.”

Health minister Edward Argar said the bill “does not privatise the NHS” whilst fellow Conservative MP Theresa Villiers said accusing the government of trying the privatise the NHS was “just plain wrong.”

Mr Argar said: “Despite misleading claims by campaigners – and, indeed, by some opposition members – the bill does not privatise the NHS. The NHS will always be free at the point of delivery.”

Two amendments tabled by Labour were defeated: one that would have banned private healthcare reps from serving on these boards, and scrutinising contracts awarded for local NHS services.

Whilst those amendments were rejected, a controversial reform to social care – which critics say will hardest hit the poorest – was voted through the same night.

It was passed in the House of Commons by 272 votes to 246. Nineteen Conservative MPs voted against the plans whilst 68 abstained; Chris Clarkson, the Conservative MP for Heywood and Middleton, voted in favour of the bill and has been contacted for comment.

Under the new clause 49, there will be an £86,000 cap on how much anyone has to pay for social care – and many will need to pay this themselves. The Prime Minister has said it is “more generous” than the current system.

The cap will cover fees for personal care, such as help with washing or dressing, but will not cover living costs such as care home fees, utility bills or food.

Under the government’s wider social care plan, from October 2023, those with assets of less than £20,000 – the value of their home, savings or investments – will not have to pay anything from these towards care fees – although they might have to contribute to fees from their income.

Opposition MPs say “thousands of people, mainly in the midlands and the north, will be forced to sell their homes,” dubbing it a “reverse Robin Hood situation.”

The health minister told MPs “no one will lose” as a result of the proposal.

Opening Monday’s debate on the new clause 49, Mr Argar said: “Let me remove all doubt on this issue: no one will lose from these reforms, compared to the system we have now, and the overwhelming majority will win.

“Underpinning the reforms set out in the plan is an additional £5.4 billion over the next three years. This funding will end wholly unpredictable care costs and include at least £500 million to support the adult social care workforce.”

He added: “Currently, one in seven adults over 65 faces care costs of more than £100,000 over their lifetime. We are capping the amount that anyone will be forced to spend on personal care costs in their lifetime at £86,000.

“That is a seismic and historic change in the way we pay for care in England.”

“To reiterate, as the Prime Minister, said on 7 September, nobody – nobody – will be ‘worse off’ than under the current system.

“Currently, around half of all older adults in care receive some state support for their care costs. This will rise to roughly two thirds under these reforms.”

The Health and Care Bill will next be heard in the House of Lords.