You are Here: Home » News » News Headlines » Audience with Toni Baker - the man behind the music of Phoenix Nights 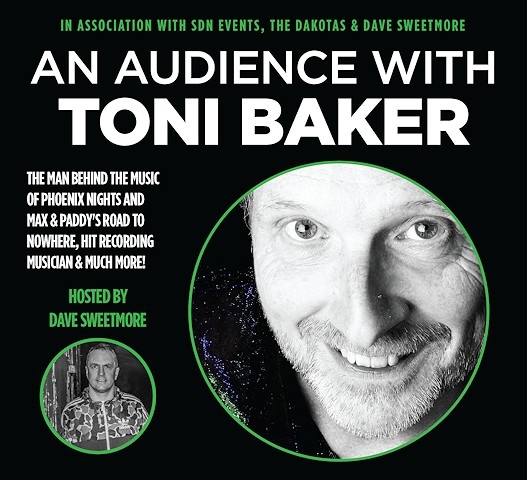 An audience with Toni Baker

Rochdale born musician Toni Baker is appearing at 'An audience with' event at the Ratcliffe Bars at Rochdale AFC's Crown Oil Arena on Sunday 5 December.

As well as working with the likes of Billy Ocean, Lisa Stansfield, Sheena Easton, and his own band, hit recording 60's band The Dakotas, Toni also co-wrote, recorded and produced all the original music and cover songs for Peter Kay’s Phoenix Nights series 1 and 2, Max and Paddy’s Road to Nowhere and The Power of Two workout DVD. He also wrote and performed the iconic theme tune for Phoenix Nights.

He has also written music for Early Doors, The League Of Gentlemen and many more television shows.

Brought up in Milnrow, Toni has been a professional muscian since 1968 and since 1972 has played on many recordings as a session player. Toni has just released a biography 'The Man Behind The Music Of Phoenix Nights' telling his life story.

He has worked with many artists and musicians over the years both live and in the recording studio, including Peter Kay, Tony Christie, League of Gentlemen, Billy Ocean, Sheena Easton, The Miracles, Brenda Holloway, Barry Ryan, Peter Noone, Lisa Stansfield and The Walker Bros.

At the event on 5 December Toni will be talking and telling stories about his extraordinary life, his career and his recently released biography. He will also be bringing his keyboard with him.

Hosted by Dave Sweetmore, there will be a chance for fans to ask questions, and Toni will also hold a meet and greet and signing session at the end of the show.

For more information or to buy tickets click here.