You are Here: Home » News » News Headlines » Veteran, 96, who had medals stolen at Rochdale Cenotaph when paying his respects, receives replacements in surprise presentation

Veteran, 96, who had medals stolen at Rochdale Cenotaph when paying his respects, receives replacements in surprise presentation 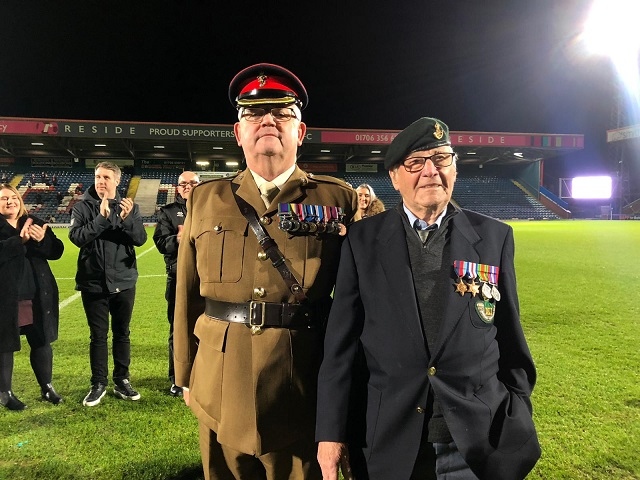 Jim Marland, 96, was presented with replacement medals after he had his stolen. Pictured with Major Phil Linehan

A 96-year-old war veteran who had his medals stolen when paying his respects at the Rochdale Cenotaph has had them replaced.

Mr Marland received a guard of honour to the centre of the pitch at half-time during the Dale match with Stevenage and was greeted with rapturous applause from the crowd.

Mr Marland, of Rochdale, had been paying his respects at the Rochdale Cenotaph a few weeks before Remembrance Day when he was pushed to the ground and robbed of the medals and other personal belongings.

His assailant made off with the 1939/45 War Star for active service during the Second World War, the France/Germany Star, the Defence Medal earned for service in the UK which was under attack, and the 1939/45 War Medal, also known as the Victory Medal.

Mr Marland said he didn’t feel the medals being taken from his chest, and it was a couple of days before the shaken former soldier felt able to tell his family.

Mr Marland was presented with the medals by Major Phil Linehan, a Reservist with 103 Battalion Royal Electrical and Mechanical Engineers, who also owns a medal mounting company, Specialised Medals Services.

Major Linehan had seen the shocking story on social media – shared by a friend who he had served with in Northern Ireland – when he immediately decided to help.

Adam Trennery, a former Royal Navy Engineer, and manager of Rochdale AFC Veterans Association, approached the club and asked them to host the event to reunite Mr Marland with the decorations and the directors were more than happy to oblige.

He said: “Jim told me, ‘I can’t wear my medals tonight like you.’ He was embarrassed he’d lost them. He didn’t know I knew the story.

“I was very keen to understand Jim’s journey and why someone from Rochdale was in the Durham Light Infantry. In the Second World War, that unit served in North Africa, Sicily, and part of 50 Division and General Montgomery brought them back to the UK because he wanted experienced soldiers in Normandy.

“Jim didn’t join until late 1943 and so he wasn’t ready for Normandy. By the time he joined his regiment, he joined in Germany and fought in Ibbenbüren and finished the Second World War in Hamburg.

Mr Marland joined the Army aged 18, serving in the UK, Germany, India, Singapore and France. He was wounded in action while in Germany, suffering a shrapnel wound to the chest, leading to a six-week stay in a field hospital.

Mr Marland said he had no idea that he was to receive replacement medals on the night, and was visibly elated.

Beaming, he said: “I’ve really enjoyed tonight; I didn’t expect it. I just want to say a big thank you to everyone who’s been so kind to me.”

He joked: “If I’d have known, I would have worn another row of medals.”

Major Linehan said it was “a pleasure” to present Mr Marland with his new medals.