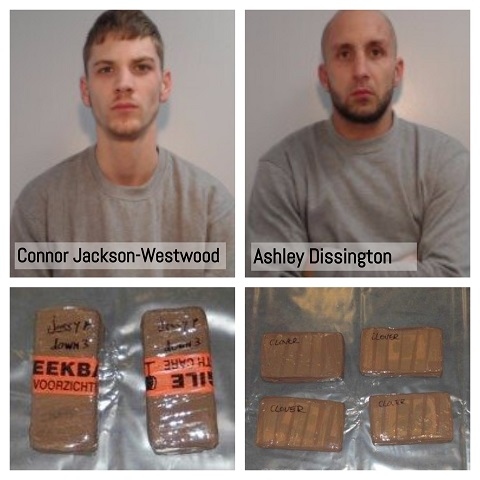 Two men, one from Middleton and one from Royton, have been jailed for a total of 35 years at Minshull Street Crown Court after pleading guilty to drugs and weapons offences.

The verdict follows a lengthy investigation by GMP’s Challenger team who work to tackle serious and organised crime in Greater Manchester.

Ashley Dissington, 35, of Middleton, was sentenced to 20 years at Minshull Street Crown Court on Thursday (2 December) for being knowingly concerned in the importation of heroin and cocaine, conspiracy to supply heroin and cocaine, and possession of a blade in a public place.

Co-conspirator Connor Jackson Westwood, 25, of Royton, was sentenced to 15 years at an earlier sentencing date (6 October) for being knowingly concerned in the importation of heroin and cocaine, and possession of a prohibited weapon.

During the trial, the court heard how, on 1 October 2020, a package from Belgium was intercepted by the UK Border Force. Once opened, the package was found to contain a total of 15kg of Class A drugs, namely 6kg of cocaine and 9kg of diamorphine, all equalling an estimated street value of around £1.5 million.

The seized items were handed over to police and detectives then made the decision to let the package continue to its intended destination at Wheatfield Industrial Estate in Royton. The contents were removed, and a decoy was put in place of the drugs.

On 6 October 2020, officers observed the industrial estate in anticipation of the package’s arrival, and it was then that Dissington arrived at the scene in his car.

He parked on a nearby street with Jackson-Westwood arriving by foot shortly after.

Jackson-Westwood was observed collecting the parcel before leaving the industrial estate and walking in the opposite direction of the parked car.

Dissington then drove his vehicle away from the area in what prosecutor David James described as a ‘route clearly adopted as an anti-surveillance technique’.

Jackson-Westwood was picked up by Dissington at a ‘pre-arranged pick-up point’ shortly after.

The two travelled to Royton Park before proceeding to open the parcel while still in the car, removing the delivery labels using a craft knife.

It was then that police arrived and arrested the pair.

Following a search of Jackson-Westwood’s home address in Royton, a number of cellophane bags containing cocaine and digital weighing scales were found in his bedroom.

A stun gun was also found in a kitchen cupboard, while goods, including a £15,000 watch, were also seized from the address.

Whilst in custody, both defendants denied all knowledge of the drugs before later pleading guilty to their involvement.

Police identified a further 16 deliveries consisting of 40 packages all being delivered from the same Belgium mail drop location to the Oldham industrial estate's storage unit within a three-month period from June to October 2020 which totalled 578.5kgs.

Judge John Potter said that ‘on the reasonable interface’ it was likely that each contained a similar amount, type and purity of drugs and would be worth a wholesale value of up to £19.5m and a street value of up to £61.5m.

He described the importation of drugs to have been 'on an industrial scale'.

During the course of their investigation, detectives from Oldham Challenger identified that Dissington had also been the user of the 'EncroChat' platform, which forms part of the National Crime Agency led 'Operation Venetic'. He was further interviewed for these additional offences in June 2021.

Dissington was found to have been using the alias 'Dizzierascal' while messaging other OCG members using encrypted mobile devices to prevent police from detecting their conversations.

He was found to be involved in dealings of Class A drugs with a potential maximum street value of £725,000 and was responsible for the collection, storing and passing of money in excess of £100,000.

Detective Sergeant Alex Brown, of GMP’s Oldham Challenger Team, said: "Today's sentencing is a fantastic result not only for the Operation Challenger team and ongoing Operation Venetic investigations but also for our local communities who are affected by the drug trade.

"We work tirelessly to make sure these people are brought to justice and will continue to do so. I would urge any members of the public with information on the supply of drugs in their local area to please get in touch with police as we need your help to uncover those involved in this type of crime."

Anyone with information is asked to call 101, or use the Live Chat service on www.gmp.police.uk.