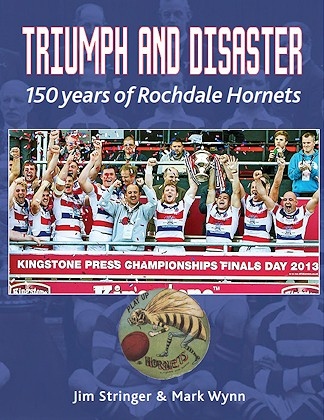 The cover of 'Triumph and Disaster - 150 Years of Rochdale Hornets'

Founded in 1871 with the lofty ambition of putting a nondescript Lancashire mill town on the nation’s sporting map, the majority of the 150 years since then have been as tough as the game itself for Hornets.

Semi-professional rugby league is not a glamorous sport and the incredible story of Rochdale Hornets is not one of glory.

Having gone 91 years between trophies and 97 years between league titles, it is a story of survival, struggle, conflict and relentless optimism. At any number of points in the last century and a half, it was significantly more likely that the Hornets would fail rather than fly.

That the club has managed to pull through the different spells of turmoil that have beaten against its door has often been down to good luck as much as good management. Painstakingly researched, ‘Triumph and Disaster - 150 years of Rochdale Hornets’ chronicles the landmark moments that have defined Rochdale Hornets’ remarkable journey from the industrial revolution to the 21st century.

And, as rugby league scrambles to define its own future, Rochdale Hornets continues to do what it has always done: it battles, onward.

Authors Jim Stringer and Mark Wynn are both life-long Rochdale Hornets supporters as well as both having served as chairman of the club.

The book officially goes on sale on Monday 6 December, and is available to order from the publisher London League Publications, Amazon, AbeBooks and eBay, and can be ordered from any bookshop. An e-book for Kindle users is also available via Amazon.

Copies can also be purchased from the Hornets Club Shop at the Crown Oil Arena between 9am - 12noon on Saturday 4 December in advance of the full launch.

The book can be ordered from the publisher for £16.50 plus free postage in the UK.