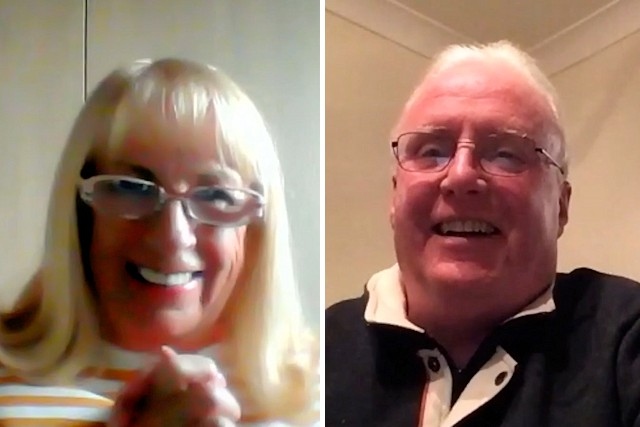 Sue O’Shea and Ian Costello won a share of £150k

Five neighbours in Rochdale are celebrating after they each won £30,000 with People’s Postcode Lottery.

The prize win comes after their Shawclough postcode, OL12 7UL, was announced as a winner with the lottery on Sunday 5 December.

Sue O’Shea was left overjoyed when she found out that she was a winner during a video call with lottery ambassador Danyl Johnson. On seeing her prize cheque for £30,000 she said: “Wow! Fantastic, oh fantastic. £30,000? I don’t believe it!

“That’s wonderful, it’ll make a big difference to all of us and our family.”

The mum-of-four couldn’t wait to share the good news with her family and during the call, she joked: “My husband is waiting downstairs with baited breathe! ‘Don’t spend it too fast’ that’s what he’ll say!”

Sue said she’d be celebrating the cash windfall with a home-cooked meal: “I’m having my sister-in-law round for dinner tonight so we’ll open a nice bottle of Sancerre, which I was saving for Christmas but I’m having it now! And I’ve got a bottle of pink champagne so that’ll be opened as well!”

When asked what she would use her winnings for, Sue said she wasn’t sure but had some festive treats for her family in mind: “I’m a planner, I’ll let it sink in. Everyone will have a superb Christmas at my house anyway.

“We’re all getting together just after Christmas, so that’ll be a brilliant surprise for them. And of course they’ll all get treated. I’ve started doing present shopping already but I think people will have extras now, there might be an envelope or two!”

Sue added that there may be a treat for herself at some point too: “We like to go on holiday. I’ve always wanted to do India, so we’ll see!”

Sunday's #30KADAY prize landed in #Rochdale where FIVE lucky #PostcodeLotteryPeople pocketed a fantastic £30,000 each 💸@DanylAJohnson was able to give a couple of them a call so here's the moment they got the good news!https://t.co/FfJZsCuTQ1 pic.twitter.com/fPfxxbQwRA

Another winner was Ian Costello who has been working on a Covid testing site for the last two years and he knew immediately how he would use his winnings. He said: “I know someone who is going to be very pleased with this, my daughter. When I started working on the Covid site, the money I’ve been earning there has been going towards a deposit for her house. So I think someone is going to get a good chunk of this.

“This is going to make her Christmas.”

Ian was quick to add that he didn’t want anything for himself and was looking forward to treating his daughter with the winnings, he joked: “It’d be great if we got her a washing machine, as that would stop her bringing her washing home!”

The other winners chose to remain anonymous.

People’s Postcode Lottery ambassador Danyl Johnson said: “What a great surprise for our Rochdale winners and with the holidays coming up it couldn’t have happened at a better time for them. A massive congratulations to all our winners today and I hope they enjoy their winnings.”

Players of People’s Postcode Lottery have helped raise over £800 million to date for thousands of good causes across Britain and internationally.