You are Here: Home » News » News Headlines » £50k worth of cannabis seized and two arrested during warrants in Middleton and Harpurhey 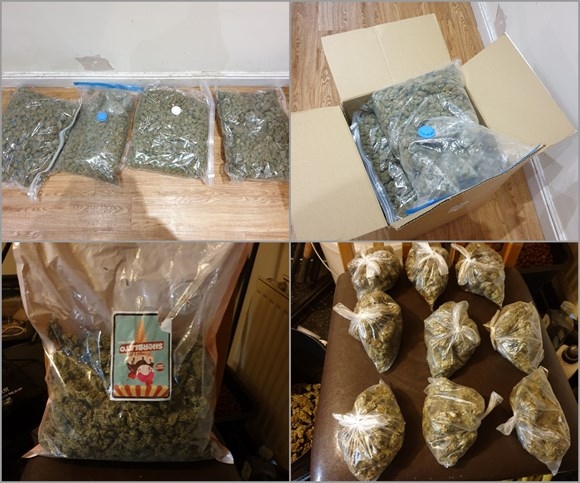 Two men have been arrested after police carried out two drug warrants at addresses in Middleton and Harpurhey this morning (Wednesday 8 December).

During the warrants, two men, aged 61 and 29, were arrested on suspicion of a range of offences including supplying class B drugs, cultivating class B drugs, abstracting electricity and possession of an offensive weapon.

They both remain in custody for questioning.

Subsequent searches of the properties uncovered a substantial amount of class B drugs that had been prepacked, a cannabis farm consisting of over 30 plants and offensive weapons.

Police Sergeant Daniel Cullum of GMP's City of Manchester division said: "Today's action is a substantial recovery for the team and I hope it highlights our commitment and dedication to disrupting and dismantling organised criminal activity across North Manchester.

"Organised criminal gangs who operate the control and supply of these drugs have a hugely destructive impact on our communities and only attract further criminality to the area. Although we have two men in custody for questioning our investigation and enquiries will remain ongoing and we will continue in our pledge to disrupt this type of criminality.

"Today's action would not have been possible without the assistance and intelligence provided to us by the public and I would encourage anyone with any concerns or information about the trade of drugs in your area to come forward and speak with police directly or contact Crimestoppers anonymously.

"I would also like to extend my message to those involved in organised crime across North Manchester and stress that we will proactively pursue all available lines of enquiry and will take robust action against you, ensuring we leave no stone unturned to bring you to justice."

Anyone with information should contact police on 101 or 999 if it's an emergency. You can also contact police via the LiveChat at www.gmp.police.uk or contact the independent charity Crimestoppers anonymously on 0800 555 111.