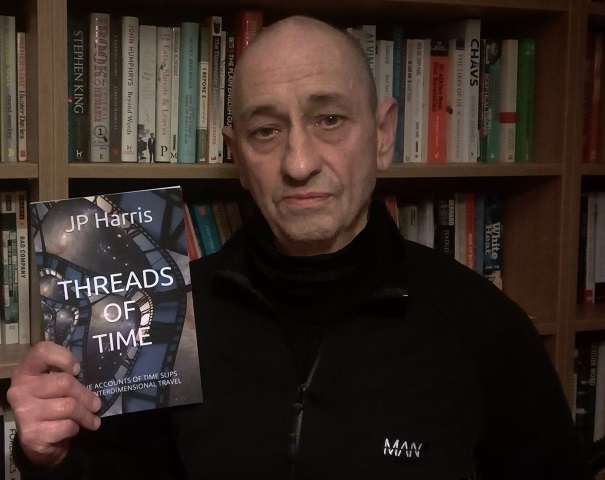 John with his book

Time travel is a popular fictional trope which ever-begets the question; do real-life time travellers exist?

Whilst deliberate time travel is seemingly impossible as of 2021, there are countless anecdotes of ordinary people who have experienced a ‘time slip’ – a brief visit to another time.

Those with an interest in the paranormal and seemingly true events will most likely have heard of timeslips in the Bold Street area of Liverpool, but several accounts closer to home have been collated in a new book, ‘Threads of Time’.

Written by John Harris Abraham – AKA JP Harris – of Littleborough, the compilation recounts the experiences of those who seem to have experienced brief time travel, including one relating to the now-demolished Dunster House in Rochdale, and another in the North Manchester area.

In 1983, Derek Gibson, of Cornwall, was visiting the north Manchester area for a family wedding and appeared to experience two timeslips ten minutes apart.

Unfamiliar with the area, he visited the day before to find the church. Upon arrival, he described it as dilapidated and rundown – but moments later the church looked brand-new. The weather had also changed from a dull and overcast day to a bright sunny one.

Derek also reported seeing people wearing different clothing, including a woman with a parasol and a hairstyle which was not modern. The scene shifted before his eyes, returning him to the rundown church.

About ten minutes later, Derek experienced a similar ‘slip’ when he saw a block of nearby modern shops suddenly change. Then, just as earlier, the scene evaporated in front of his eyes, replaced by modern shops and the surrounding streets, and the noise and the bustle of a busy road that passed directly in front.

John, who has a self-proclaimed interest in phenomena, said: “'Threads of Time' is a compilation of accounts collated from individuals who may have experienced a brief excursion into another time zone or have slipped into an alternative dimension.

“In 1999-2001, I was active on a range of internet chat-based forums in which the main topic was on ‘strange but true occurrences’.

“I used these sites for ideas because at the time I was writing a fiction book based on interdimensional travel and wanted to gain more of an insight.

“I recall four cases, which I documented and archived.”

It was in 2019 that John began to compile a book on timeslip occurrences, retrieving his notes from his previous contacts on the phenomena-based chatrooms. He began to carry out research, contacting authors like Jenny Randles, Tom Slemen and Jim Penniston – who have all written about unexplained incidents like the infamous Bold Street timeslips.

John noted: “In addition, I mediated and asked permission for content from the Daily Express, Prada, and other media channels and academic institutions across the world.”

Whilst the 1983 account of Derek Gibson has been featured courtesy of Jenny Randles’ book ‘Supernatural Pennines,’ the 1967 anecdote of a timeslip at Rochdale’s Dunster House was provided first-hand to John.

In 1967, a young boy – known only as DM – lived near Dunster House on Manchester Road. It had been empty for as long as he could remember, and he used to pass it on a daily basis when walking to school. DM was always curious if anyone actually lived there and what was behind the huge wall to the house.

One afternoon when he was returning from school, DM noticed the gate was open. Peering through, he saw the most impressive garden he had ever seen, and an old woman wearing a full-length black dress and distinctive bonnet. She looked at DM with a curious expression before asking him if he wanted to look.

A startled DM walked into a garden, where he saw wisteria, weeping willow trees encircling a fountain that featured the Roman god Bacchus.

John added: “DM is highly pragmatic. When I met him, he appeared to be a matter of fact, no-nonsense type of person. He does not have time for anything relating to the ‘paranormal, conspiracy theories etc.’

“To support his profile, he is a retired engineer and has a scientific approach to problem-solving.

“On reflection, DM guessed the style of bonnet was from the mid-Victorian era, possible the 1840s. I asked him how long he stayed there, and he replied, ‘could have been an hour.’”

As DM continued to explore the grounds, he noticed the old woman was now on the other side of the garden, walking through the door of a black wrought iron shed. He wanted to catch her attention before he left, to thank her for allowing him a look around.

“He told me ‘She just disappeared. I noticed the door was still open and looked inside, nothing - she just vanished’,” John said. “There was no access point into the house whatsoever.”

John continued: “Regarding the Derek Gibson event in 1983, the actual location was not mentioned, but hinted that it was around north Manchester.

“However, I carried out my own research; my assessment is that the location of the church that Derek visited, is in Crumpsall, possibly near Delaunays Road, not far from North Manchester Hospital.

“I looked on old maps to evaluate any potential factors. I also wanted to find other aspects on Dunster House.”

John says he likes to “retain a coherent approach on why these things occur” adding: “The young boy who may have gone back in time to a garden that was no longer there, I have two other similar cases of boys at the same age, who have slipped into other timelines and dimensions.

“Perhaps children are predisposed to experiencing strange events, and possible geological factors; if locations contain quartz or are near fault lines, sometimes this can create abnormal occurrences.”

John has a degree in archaeology and geography and conducts research and documents prehistoric structures and rock carvings. He currently works in web content management and his other interests include urban exploration, which sees him photograph and film abandoned structures such as World War Two air raid shelters, tunnels and mines.

Threads of Time is available in both paperback and e-book formats from Amazon.