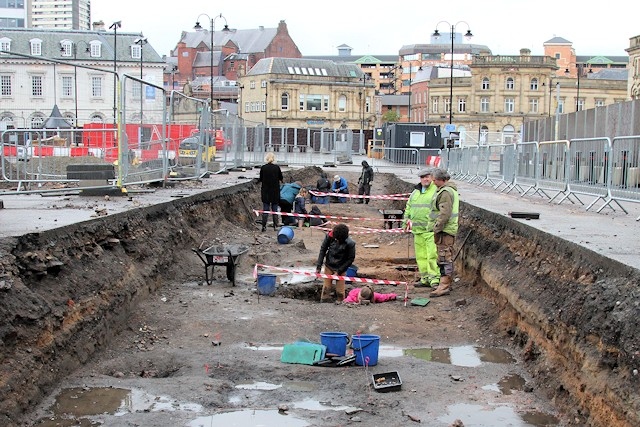 Last summer’s archaeological dig at Town Hall Square will be featured on the Thursday evening (13 January) episode of the BBC’s Digging for Britain series.

During the two-week project – which was one of several public events being organised as part of the wider restoration of Rochdale Town Hall – residents of all ages helped historians dig out the site, process, catalogue, and clean the finds, as well as finding out more about the history of the area.

Led by archaeologists from Salford University, the team found the foundations of homes belonging to wool merchants from the 18th century beneath the surface between The Flying Horse Hotel and Rochdale Town Hall - known to have been a key part of the trans-Pennine textile trading route.

At this time in 1851, it is known that Rochdale residents had ‘cottage industries’ within their homes, working and spinning wool, making toffee, selling boots, plus a butcher’s and bakers, amongst other things in their houses to earn money.

An exciting find at the town centre site has been a practically perfect intact ginger beer bottle belonging to ‘S Casson’ of Rochdale. This was found where resident Samuel Casson, aged 20 in the 1851 census, once lived at 13 Packer Street with his family as a ginger beer brewer.

Examples of domestic fineware – giving insight into the locals that once lived in the Packer Street homes – were also found at the dig, including an Old Mother Hubbard nursery rhyme plate, chinaware in a ‘classic Victorian willow pattern’, thimbles, hair clips, cutlery, vases, and jugs.

Digging for Britain's synopsis says: "Alice [Roberts, the show's host] also visits the town of Rochdale in Lancashire, just ten miles outside Manchester, where a huge community dig is altering our understanding of the Industrial Revolution.

"Alice meets local families who are digging beneath the spectacular Gothic town hall to uncover the remains of terraces and tenement blocks that housed the working men and women of Rochdale, shedding new light on the way industrialisation changed our towns and cities."

Digging for Britain airs on BBC Two at 8pm Thursday 13 January and will be available on BBC iPlayer.