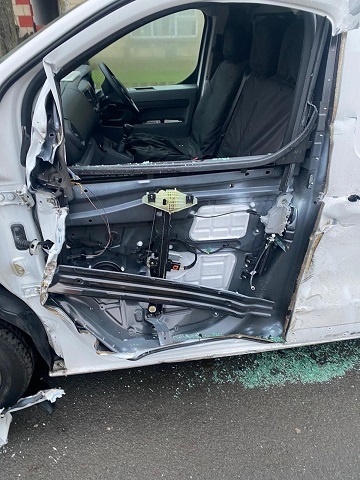 Signs warning HGVs away from a residential area of Castleton have been installed as lorries are – incorrectly – being directed through the estate by their sat navs.

Residents of Kirklee Road and Alder Road in Castleton have had their vehicles damaged for at least two years, as lorries coming off the motorway are being directed through the estate to reach Cowm Top Industrial Estate via Hillcrest Road/Cripple Gate Lane.

Just last week, a Guinness Partnership van was damaged in the early hours of Wednesday morning (12 January) by one such lorry on Alder Road.

The van’s owner, who didn’t want to be named, said his car was also damaged at the same time, and believes it will be written off. A bollard on the street was also ripped out of the pavement, meaning this will need to be retarmacked.

He said: “I was fuming at the time but it’s just one of those things that happens. I’d only had my van back two days from another crash on the motorway, so I thought I was dreaming when I saw it.

“I do feel for the lorry drivers. They’re trying to reach Cowm Top and they’re from London so don’t know the area, and it is a ballache because cars are parked on both sides of the road. It’s bad enough when you meet someone and have to reverse.”

Local councillor Billy Sheerin has been understandably furious and has been liaising with highways to put a stop to the issue.

He said: “When the roads were built, they were both cul-de-sacs. Then the council estate was built, joining them in a loop. There was one car on that road when I was younger; they’re 1950s roads not designed for now.

“The problem is, when lorries trying to get to Cowm Top miss the road, their sat nav incorrectly takes them through the estate. There’s cars parked on both sides of the road all day long, especially at night-time, and then these lorries are getting trapped on a ‘horseshoe’ road.

“This has been going on for some years. One lorry wiped out five cars in October.”

The problem is very similar to that that residents of the Green, also Castleton, were experiencing some years ago with lorries trying to turn around on the cul-de-sac, or use it as a cut-through, despite it not being a through road.

Read more: Residents desperate for ‘No Through Road’ signPublished: 21 May 2018

Permanent signs on poles - warning of no entry for HGVs - have been installed, as well as temporary signs, on the corner of Queensway and Hillcrest Road and on some of the other residential streets in the area outside Castleton Primary School, Albion Street and Melville Street. A sign has also been added to Newchurch Street, directing lorries making deliveries to Farrel on Queensway.

Councillor Sheerin added: “The big articulated lorries cause so much damage, and it’s annoying when they crack into cars. They don’t stop because they don’t notice or feel it. One resident saw the van recently get wiped out, jumped on his bike and followed the lorry to the industrial estate.

“It’s all on CCTV; so many of the residents of Kirklee Road have got CCTV. The lorry driver didn’t admit they’d done it.”

“We’re doing everything we can to try and remedy this. The residents have every right to be angry.”

Local residents say that when the industrial estate was built, Newchurch Road, Albion Street, and Hillcrest Road were meant to receive signs as per the planning conditions stating no entry to Cowm Top as not suitable for HGVs.

Lara Howley said: “When Cowm Top was built years ago and people appealed, this was one of the concerns. Coming up here, cutting up the lane and [we were] assured it would be a condition that the main entrances, Albion, Newchurch, Hillcrest were to be signposted not suitable for HGVs, no access to Cowm Top industrial estate. It’s probably been over 20 years since.”

Nelly Carey added: “They are always driving up Hillcrest Road as well (the dirt track [Cripple Gate Lane]). It’s a dead end up there but the postcode leads them up there and then they get stuck because they can’t turn around.”

Speaking in 2019, Sammy Taylor said: “It’s been happening a lot recently. The postcode for Cown Top leads them to Kirklee Road.”