You are Here: Home » News » News Headlines » More than 100 new homes to be built on former Carcraft site in Rochdale 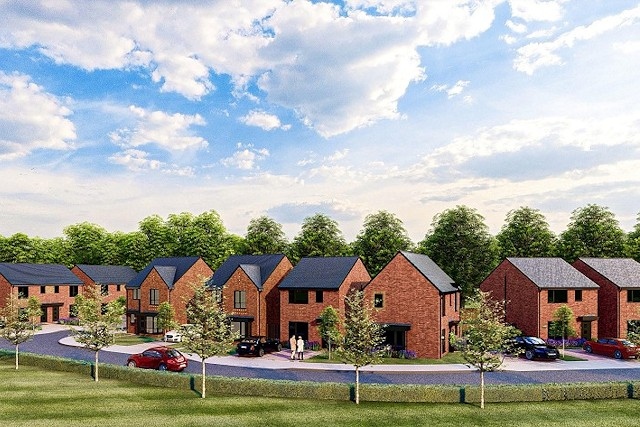 How the proposed development, on the former Carcraft site in Castleton, could look

More than 100 new homes are to be built on the vacant former Carcraft site, in Rochdale.

Planners have given the go ahead for a residential development on land off Nixon Street, in Castleton, which was last occupied in 2015.

The eight-acre plot will accommodate 102 three and four bedroom houses, with properties being a mix of detached and semi-detached.

As part of the scheme, applicant Hive Homes will also transfer a neighbouring parcel of land to the council for a new primary school.

A separate developer’s plan to build 250 homes across the two sites was signed off in 2016, but it proved too costly to remediate the land now earmarked for a new school.

However, this new proposal was unanimously welcomed by the council’s planning committee when it met on Thursday night.

Councillor Shah Wazir said: “This brownfield site has a history that we wanted to develop it especially for residential purposes and it hasn’t materialised.

“I think this application is not over-development, as it has been in previous cases, it’s just the right amount.”

Councillor Shah added: “I think what we look for as councillors in our borough is a kind of ideal situation to develop and offer quality houses – and the variety is there. I’m personally happy to see this application go through.”

The site on Nixon Street includes the location of the now demolished Marland Mill and the former Carcraft site, which was previously the home of Castleton Moor Mill which was demolished in the 1960s to make way for the first Asda supermarket in Rochdale.

Castleton ward councillor Billy Sheerin said he was ‘absolutely delighted’ with the plans.

He said: “This site has been desperate for years – it’s a brownfield site, we are committed to building on brownfield sites and I will give my full support.”

Access to the new estate will be via a continuation of Nixon Street and the developer will pay for traffic calming measures both here and on nearby roads.

Trees will also be planted along the streets within the development to create a more pleasant ‘feel’ for residents. Each home will also have an electric vehicle charging point.

But the developer will not be making the usual financial contributions to open space, formal sport and education as the council accepted this would make the scheme financially unviable.

For the same reason, neither will there be any affordable or social housing within the scheme.

He added: “The profit we make from the sale of houses will be returned to investing members and recycled into social housing projects.

“Although the site is under pressure from a viability basis on contributions in the short-term, in the longer term money will ultimately be recycled into the public sector for social house benefits.”

Mr Milner added that the plans would also deliver ‘much needed new housing’ in the borough’, as well as releasing land for a new primary school.