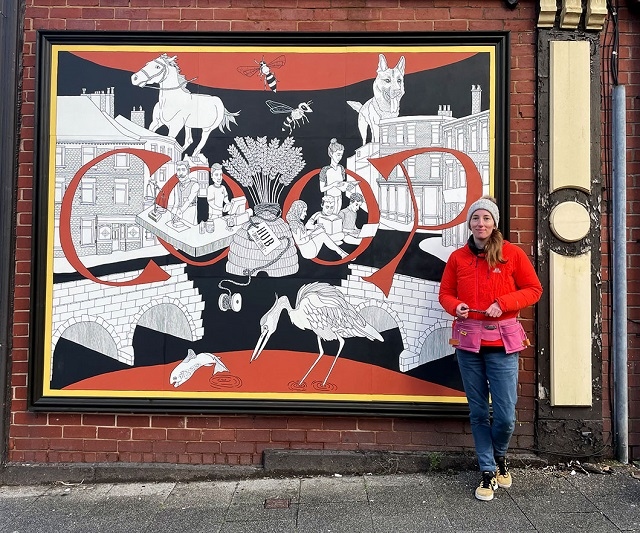 With murals across Rochdale town centre, it’s fair to say local artist Doodlher has well and truly put her creative mark on the town.

Real name Victoria Whitaker, Doodlher’s work can be seen all over Rochdale, from the Duke of Wellington outside the Wellington Mews apartments on Smith Street to the mural at Reel Cinema.

Her latest commissions include a two-stage project at the former Butterworth Jewellers building on Drake Street, a mural for the Voltalab Sound Studios on Kenion Street – known for being the recording studio for Joy Division – as well as some smaller ‘secretive’ works.

The former Butterworths has been transformed, ready for its new lease of life as the Co-operative Enterprise Hub. A painted mural taking its main colour from the building’s vibrant terracotta bricks graces the back of the building, whilst five decorative window decals – inspired by stained glass – feature on the front.

The rear mural depicts a number of local connections and nods to local heritage, including bees, a heroic dog that rescued a family, the wheatsheaf, the Pioneers and a bobbin.

Doodlher said: “I designed the vinyl artwork myself by converting the original character pen drawings made for the mural into digital graphics. Unlike the painted mural, the window designs have inherited the old shop front's beautiful yellows and gold leaf accents.

“It’s nice to see a project finally come together. Including the mural, this project has been a long one with lots of hard work conceptualising, designing and then creating the final artwork.”

She added: “It’s been quite an honour to sprinkle some of my creativity onto the Drake Street heritage action zone regeneration project.”

The famous Kenion Street Music Building – now home to the Voltalab sound studio – has also been treated to a Doodlher makeover, with a large paste-up mural made from a series of individual pen drawings. These have then been scanned, sized-up, printed and layered before being pasted onto the wall with a home-made wheat flour glue.

The self-taught artist has also been dropping smaller paste-ups of her artwork in secret locations around town, with permission granted for those in prominent locations.

She explained: “I don’t reveal their locations just a photo on my social media feeds and people have to hunt them down.

“I’m enjoying this approach to displaying my doodles. Previously my original drawings would either be boxed away forever in a sketchbook or stacked in a drawer. Pasting my illustrations somewhere 'in the wild' gives them a new lease of life and I hope will put a smile on the faces of those who spot them.

“I am looking at putting more pieces up around the town, so if a business did want one outside, they can always get in touch to join my paste-up art trail list.”

Whilst some may view any form of street art as graffiti, Doodlher opposes this, saying: “Paste-ups are a huge part of street art and are usually associated as being ‘graffiti’ even if they’re technically not. This type of art has so much potential for fun, inclusive, free outdoor activities like art hunts.

“Towns like Rochdale are actively inviting artists to decorate the town with art to create that ‘destination feel’ but organic, spontaneous art is still viewed as taboo, even though it’s that stuff which makes a town’s true personality shine through.”

Doodlher added: “Walls are walls – we all know what they look like – so when you see something unexpected, like a piece of street art, I feel that it truly has the power to snap you out of routine thoughts and can make your stroll from A-to-B that little bit more interesting.

“If there’s one thing, we’ve all learnt from being cooped up indoors during the last two years, it’s that getting outside and experiencing art in some form (be it music, theatre, cinema, visual arts) is so important for our wellbeing.

“I hope that by sticking my stuff outdoors it becomes more accessible for everyone to enjoy, in their own time. I’ve already had messages from people who have either already found them and thanked me for the fun, or who are excited to get out and look for them as a family activity.”