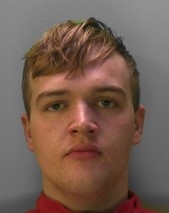 A 23-year-old man has been jailed for assaulting four British Transport Police officers.

Nathan Hughes, of Castleton, pleaded guilty to four counts of assaulting an emergency worker and resisting arrest and was sentenced to 26 weeks in prison on Tuesday 18 January at Manchester and Salford Magistrates’ Court.

He was also ordered to pay £250 compensation.

The court heard that shortly before midnight on Tuesday 14 December, officers attempted to arrest Hughes for criminal damage at Manchester Victoria Station.

As the officer attempted to handcuff Hughes, he resisted arrest and punched him in the face and took the handcuffs from him.

Another officer stepped in and used her captor spray to subdue Hughes. Once handcuffed, he attempted to take the officer’s captor spray and taser to use them against the officers.

Officers called an ambulance when Hughes told them he had swallowed three bags of heroin but when he continued to be aggressive, officers made the decision to take him to hospital in their patrol car.

At this point, Hughes assaulted another officer, kicking him and dislocating his shoulder.

Once at hospital Hughes once again become erratic and aggressive, spitting at officers and trying to bite them.

Chief Inspector Lorna McEwan said: “This was a despicable act of violence against officers who were simply doing their duty. Police officers, like everyone else, do not come to work to be assaulted and abused, they are there to protect the public.

“It’s never an acceptable part of our job to be assaulted and we will not tolerate this type of behaviour on the railway.

“We will continue to do everything we can to investigate offenders like this and bring them to justice.”