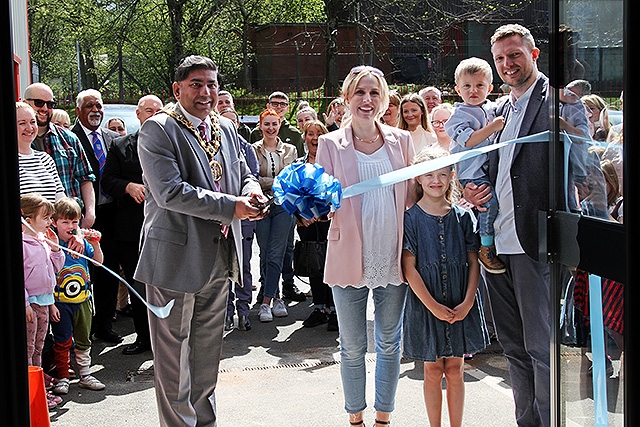 After several years of hard work and preparation, the Jolly Josh charity opened the doors to its inclusive centre in Castleton on Saturday (30 April).

Families flocked to the centre, which has been fully created with disabilities and other needs in mind, and was officially opened by the Mayor of Rochdale Aasim Rashid.

The children’s charity hosts stay-and-play sessions for children with disabilities and special needs, having started out at Springside with Hamer Learning Community.

The premises at Ensor Mill are fully accessible for a range of needs and disabilities with specialist interactive sensory equipment for the children and their families to enjoy together - with many of the children's faces lighting up at having their own space, specifically for them.

The venue has a multi-functional room for various sessions, including the stay and play baby and toddler sessions, complete with a range of activities: there's an interactive 'magic carpet' (purchased with a donation from the East Lancashire Freemasons), a ceiling hoist to aid moving which spans the entire length and breadth of the room, plus various toys and even equipment donated by bereaved parents.

A specially built hydrotherapy pool is already proving popular despite not being open yet, with one parent describing how being in the water is freeing for her wheelchair-bound daughter, and how it's the only time they can share a hug, something so many take for granted.

There are two disabled toilets on site, plus the second 'Changing Places' toilet in the borough, which was proudly opened by Zack Kerr, 26, a Changing Places campaigner and winner of the National Diversity Awards 2021. He said cutting the ribbon to the fully accessible toilet and changing facilities was "great".

Jolly Josh was given 10 years’ worth of free rent at Ensor Mill by local businessman, the late Peter Cordwell in 2019.

A special blue plaque, modelled after heritage plaques, has been installed outside the venue in Peter’s memory.

His sister, Alison McGuigan, a trustee of Jolly Josh, and Peter's wife, Sharon, said: "Pete would have been really proud to see Jolly Josh completed.

"He would have been very grateful for the support that's been had from everyone."

Named after their son, Jolly Josh was started in September 2017 by Carole and James Kelly, after discovering there were no groups for young disabled children in Rochdale.

Josh was diagnosed with the genetic condition Mitochondrial Disease at the age of six months. The condition causes mutations in mitochondria, vital to every cell in the body, with Josh confirmed to have ‘extensive brain damage’ as a result.

After his condition deteriorated, Josh was taken to Derian House children’s hospice, where he died on 27 August 2017, just one month before Jolly Josh was due to begin.

The stay-and-play sessions were set up with the hope to bring families together, provide peer to peer support, share experiences, and eliminate isolation, especially for children with disabilities and special needs throughout the borough.

The group continues in his legacy, with the opening of such a needed place proving emotional for many.

Mother of two Jaime Foster, 32, who has cerebral palsy, said that she didn't realise she would be emotional.

She said: "My school did build a hydrotherapy pool and it helped so much. It helped ease pain I didn't even know I had, and seeing this one, it hit me that I never had facilities like this, not here in Castleton.

"When you're a child, you don't know any different but mum felt like there was nothing there, nothing available or that I didn't fit the criteria. I was very lucky to be treated like everyone else and accepted, but I had to realise my limits and overcome them.

"I've worked in childcare and nurseries with a similar set up to this playroom, but it wouldn't have had a hoist; there's so many things here that will make things easier for people that able-bodied people take for granted. Sometimes people are surprised I have work and have children, but it shows that children can become something, and I like the idea that someone like me [with their own needs] could be that role model for them."